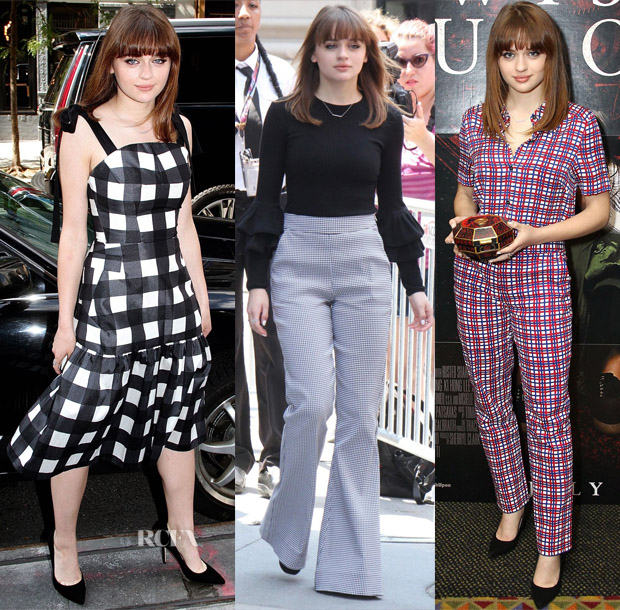 On Monday (July 10), Joey King was in New York City to promote her ‘Wish Upon’ film, where she made three appearances—each with their requisite wardrobe change.

‘Good Day New York’: Starting the day with ladylike charm, she donned a By Johnny Resort 2017 dress for her appearance on ‘Good Day New York.’ I love the impact of the bold, geometric ribbon motif here—and the dropped-waist flare of the skirt.

AOL Build Speaker Studios: She parlayed the sweet sophistication of the first dress into another By Johnny look at the Build Studios, this one from the Fall 2017 collection. While there was no question it was made for the fall season, it was an ensemble that flirted with detail in the ruffle sleeves and flared pants despite its inherent simplicity.

‘Wish Upon’ Special Fan Screening: I could get on board with her black pumps in her first look. But, this Diane von Furstenberg plaid windowpane shirt and matching trousers were really crying out for a sandal instead. The clutch was also an unusual pairing, as this fresh and fun DVF ensemble really had the potential to have been so much stronger with better styling. 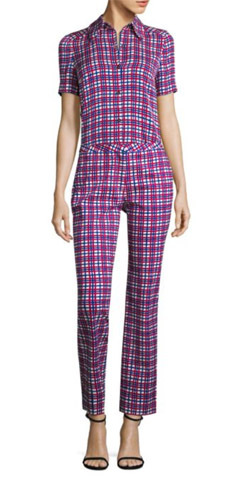 Sophia Bush In Wolford & By Johnny ...

Joanne Froggatt In By Johnny – Sen...

Holland Roden In By Johnny – Vanit...

Gabrielle Union In By Johnny & Raqu...

Gigi Hadid In Tanya Taylor – Out In New York City