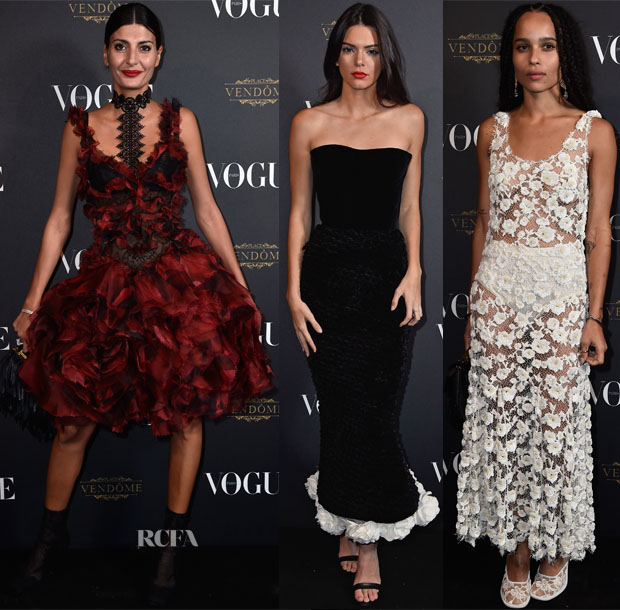 A crush of chic beauties and models of the moment made for quite the spectacular showing at the Vogue Paris 95th Anniversary Party on Friday (October 3) in Paris, France.

Giovanna Battaglia: Everything was coming up roses, in rather dramatic fashion, for Giovanna who left no petal unturned in this Alexander McQueen Fall 2015 red rose organza and lace ruffle dress worn with a lace bra and black lace embroidered boots. I kind of wish that lace collar piece was missing in action.

Kendall Jenner: The model went the sophisticatedly chic route in an Ulyana Sergeenko Fall 2015 Couture black velvet bustier gown constructed with a touch of youthful charm in the large collection of ruffle roses that dotted the hem of the dress. The finish of a ruby lip brought even more va-voom spirit.

Zoe Kravitz: Adding more rose-laced, flower-power to the proceedings, she rocked the Balenciaga Spring 2016 dress that she modeled during the label’s runway show paired with Balenciaga matching mules and complementary jewels. This is a more delicate side to Zoe’s style, but the full-on sheer story and high-waisted briefs has me fatigued on this occasion. 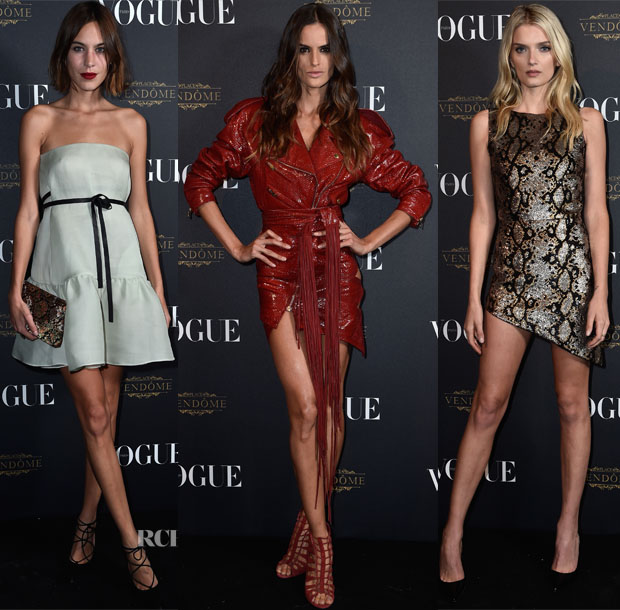 Alexa Chung: Leaving her more androgynous style vibes at home, Alexa trotted out a Valentino Spring 2016 girly dress complete with a ruffled hem and black tie sash plus balletic lace-up pumps. But all I could focus on was the lack of support around the bodice—and that the dress appeared as if it could fall off at any second.

Izabel Goulart: Sliced and diced, shredded and skin-tight, this Alexandre Vauthier Fall 2015 Couture little red number was sizzling, rating high on the hot meter. I actually quite like that the top half of the look was more covered up in a blazer-inspired silhouette. Perhaps all the cutouts have you saying, next, but there’s no denying the model in her brought out the best in this dress.

Lily Donaldson: Shining brightly in metallics, she wore an asymmetrical Saint Laurent paisley-imprinted ensemble with black pumps that was a wardrobe malfunction waiting to happen on her right side. 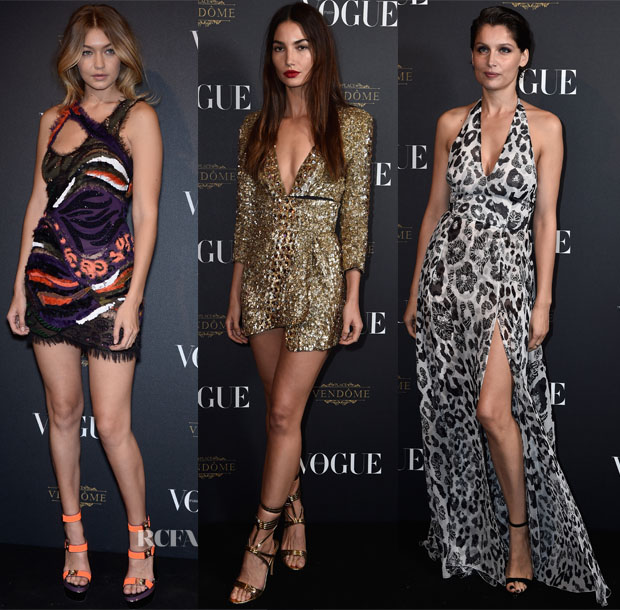 Gigi Hadid: Also donning her same catwalk look that she walked in the Versace Spring 2016 show, Gigi turned heads in the playfully sexy, fringe-embroidered dress. Normally, overtly chunky platforms will find no favour with me, but her Versace Spring 2016 neon buckle soles punched up this look in top form when black pumps would have killed the energy.

Lily Aldridge: King Midas has nothing on Lily in her shimmering golden mini, with Lily also donning a sexy, embellished Fall 2015 Couture creation from the perennially sexy design house of Alexandre Vauthier. Of course, gold shoes from the collection were a must.

Laetitia Casta: Walking on the wild side in the most graceful way possible, Laetitia balanced the intense edge of boldly exploded animal print with the flowing silhouette in this Versus Versace Spring 2016 gown. 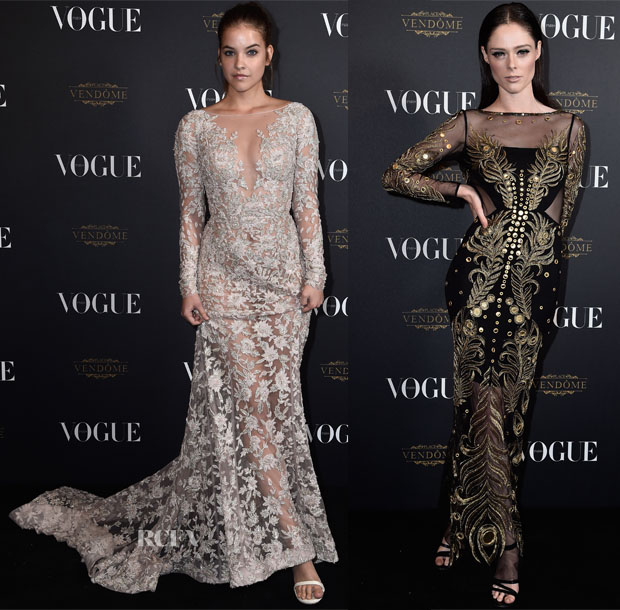 Barbara Palvin: Déjà vu is the first word that sprung to mind in seeing this Ralph & Russo Couture Spring 2015 sheer, floral lace gown. ‘No, just no’ was the second set of words, as the dress just appeared tired and dated on the fresh young beauty.

Coco Rocha: Posing in a Temperley London Fall 2015 gold-embroidered design, the model proved that sheer gowns can be majestic and elegant. 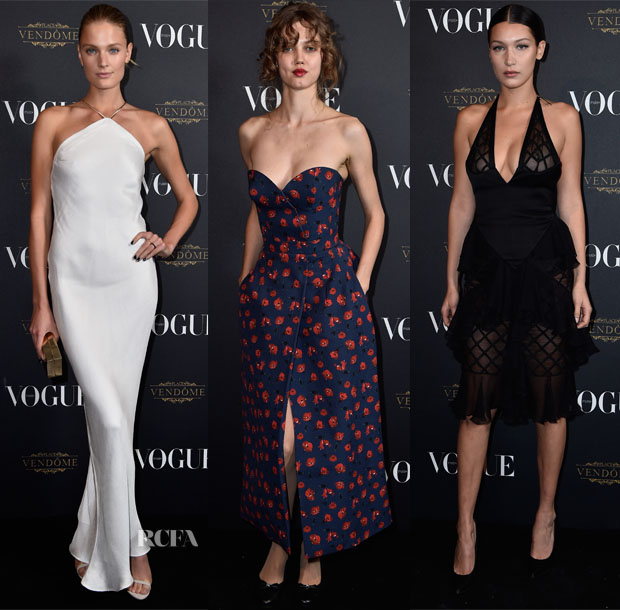 Constance Jablonski: Impressively simple, the model’s minimalist Calvin Klein Collection white halter gown was a refreshing departure from some of the more contrived ensembles at the party—even if it perhaps could pass for bridal wear among some circles.

Lindsey Wixson: While she lost me with her styling and the curly bob, her Ulyana Sergeenko Demi Couture retro-esque, navy and red-patterned dress had an effortless, lighthearted spirit that possessed a sense of fun charm.

Bella Hadid: Not content to let the sheer black mania have a moment’s rest, Bella delivered her own brand of sultry allure in a Balmain plunge dress that left precious little to the imagination. From a distance, the see-through trellis detail and ruffles are fine, but upon closer inspection, there’s a missing piece of sophistication—and her lacklustre styling could have likewise used a breath of fresh air. 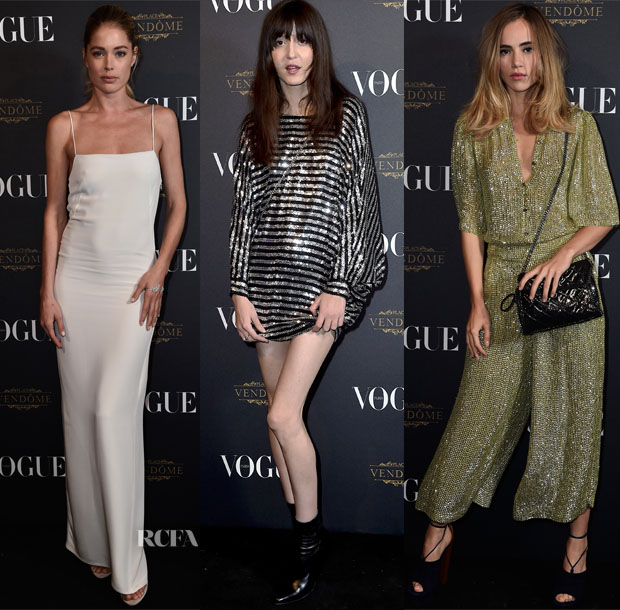 Doutzen Kroes: Much like Constance, the model wore a sleek, body-skimming Calvin Klein Collection white gown to highlight her enviable curves. The simplicity allowed for a true celebration of her physique.

Suki Waterhouse: Skipping the see-through, overtly sexy shtick, she wore a Temperley London Spring 2016 glittery chartreuse jumpsuit with Aquazzura ‘Very Eugenie’ platform heels. The black bag and shoes wouldn’t have been my first choice as they impart a sense of heaviness to all that shine factor, but the platforms were clearly chosen for their playful quirk.