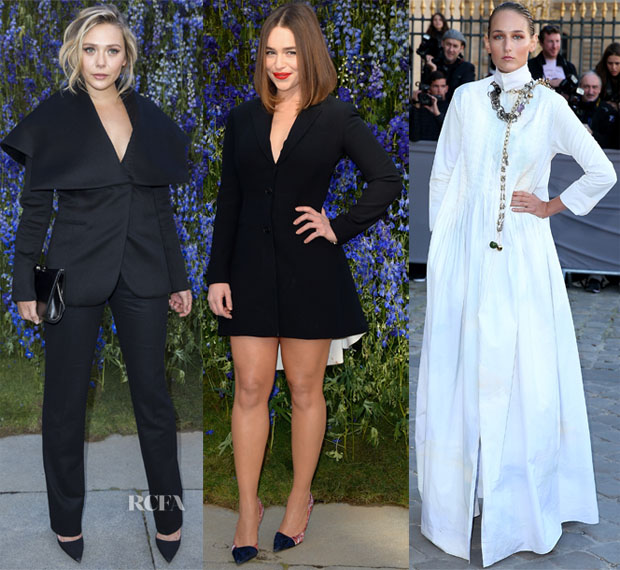 The Christian Dior Spring 2016 front row featured no shortage of Dior darlings who were taking in the looks that were presented during Paris Fashion Week on Friday (October 3) in Paris, France.

Elizabeth Olsen: Chic for days, the ‘Avengers: Age of Ultron’ actress was the very representation of androgynous allure in a Dior Haute Couture black cashmere jacket with black wool pants paired with a Dior clutch and Dior heels. Although the sleeves could be deemed a bit on the long side, the oversized shawl collar and the monochromatic power of this minimalist moment—not to mention the breezily undone look of her blonde locks—won me over.

Emilia Clarke: Also balancing the masculine-feminine line, the ‘Game of Thrones’ stunned in a Dior black silk and wool cadi dress that had the makings of a tailored blazer. What could have been a rather nondescript dress Emila took to the next level with the welcome punch of Dior navy and pink heels and that just-bitten, berry-stained lip.

Leelee Sobieski: Straying away from the black trend, Leelee channeled the lighter side in a Dior Haute Couture hand-painted, pastel cotton dress with a Dior Haute Couture necklace and shoes. Ironically, the effect was still rather heavy given the strict, monastic-like silhouette. Yet, she wore it with a sense of drama that certainly brought its own measure of captivating intrigue.