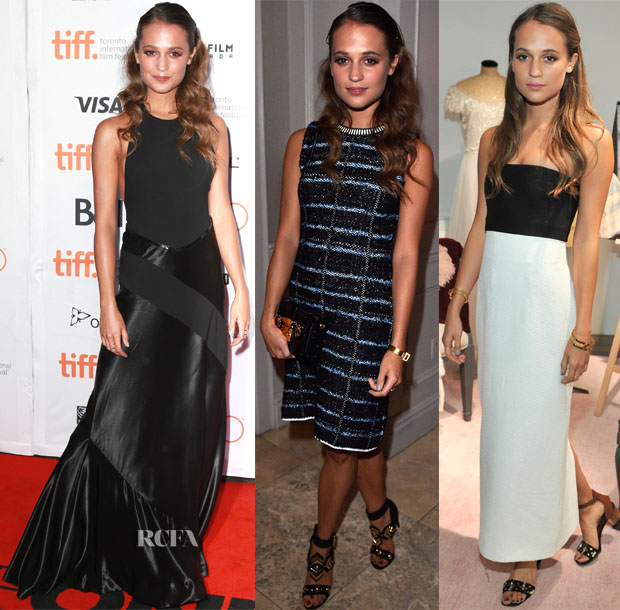 From the Venice Film Festival to the 2015 Toronto International Film Festival, Alicia Vikander continued making the rounds with appearances at ‘The Danish Girl’ TIFF premiere, HFPA/InStyle’s Annual TIFF Party, and the Holt Renfrew And Variety Magazine Cast Dinner, all hosted this past weekend in Toronto, Canada.

‘The Danish Girl’ Premiere: Continuing her BDOTW chic streak, she returned to a more minimalistic aesthetic for the TIFF premiere on Saturday (September 12). Her custom-made Louis Vuitton open-back gown was crafted in silk satin, crepe, and leather. I love how this mix of materials created movement across the all-black dress while providing visual interest. Romantic curls injected a note of charming femininity into the edgier look.

HFPA/InStyle’s Annual TIFF Party: Making a quick change, she donned a head-to-toe Louis Vuitton ensemble for the party after the premiere, channeling elegant grace. The Fall 2015 classic tweed dress was edged up with leather studded sandals and a Petite Malle clutch While the charm of the wavy strands was again likeable, I may have preferred a loosely tied-back updo with this tweedy frock—but perhaps she had little time to restyle her hair between events.

Holt Renfrew And Variety Magazine Cast Dinner: Giving the Louis Vuitton looks a night off, she wore a sleekly simple Rosetta Getty Pre-Fall 2015 dress at ‘The Danish Girl’ dinner on Sunday (September 13) held at The Holts Café. You may remember this dual-colour, less-is-more design was previously worn by Elizabeth Olsen, but I was just as content to see it repeated without a jacket this time around. 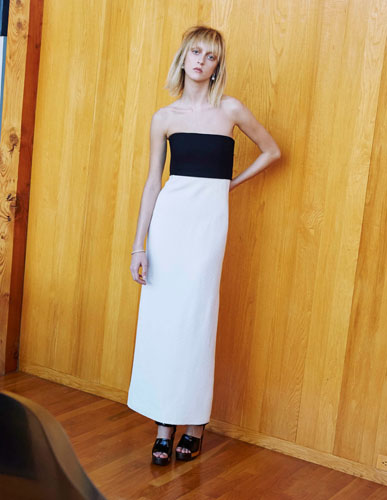