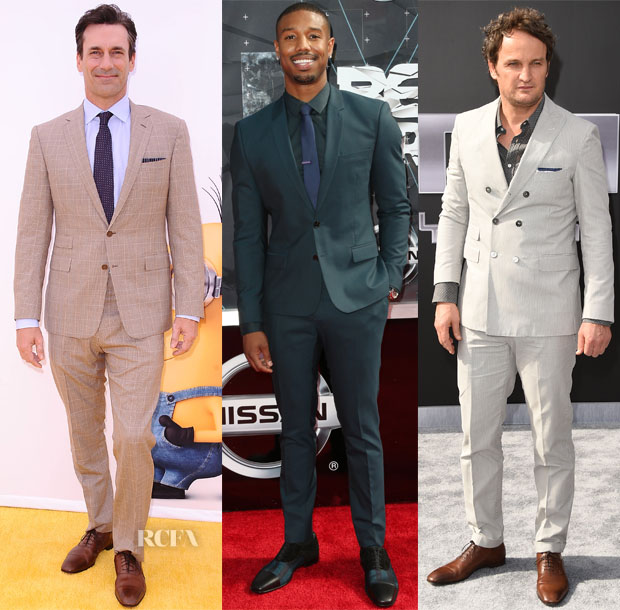 Over the weekend, a group of guys attended a range of events, and if nothing else, I couldn’t be more delighted that there was not a shred of traditional black suiting on the red carpet this time around.

Jon Hamm: On Saturday (June 27), the actor joined Sandra Bullock at the premiere of ‘Minions’ at the Shrine Auditorium in Los Angeles, California, where he wore a summery Ralph Lauren suit contrasted with a baby blue button-down shirt and dark navy tie.

Michael B Jordan: At the 2015 BET Awards on Sunday (June 28), Michael was handsome in a tonal gray-green Sandro suit—with the hue even extending to his dress shoes. Although it was monochromatic, the look had a rich depth, especially when finished with a cobalt tie.

Jason Clarke: While I appreciated his willingness to step outside the traditional sartorial box at the ‘Terminator Genisys’ premiere on Saturday (June 28) at the Dolby Theatre in Hollywood, California, his ecru Michael Bastian double-breasted sport coat wasn’t exactly flattering. The ill-fitted effect continued with the unbuttoned dress shirt, with Christian Louboutin ‘Greggo’ shoes completing the ensemble. 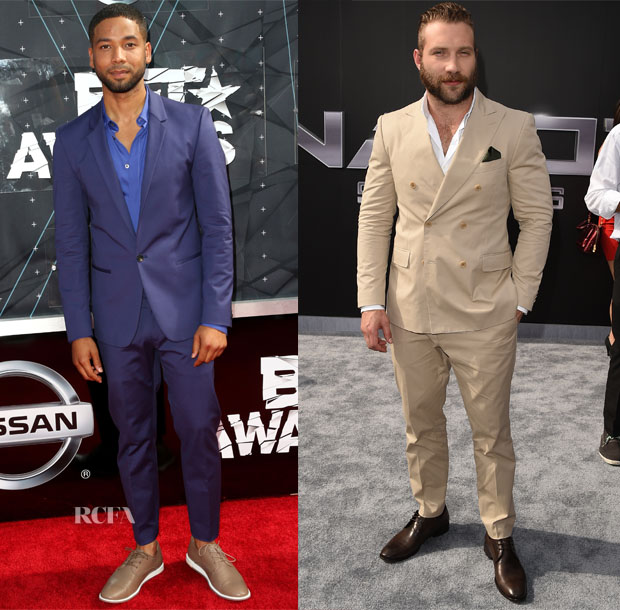 Jussie Smollett: Before the ‘Empire’ star performed at the 2015 BET Awards, he hit the red carpet in a navy Calvin Klein Collection sport coat and cropped pants styled with casual-cool flair as he nixed the tie and added a sporty pair of dress sneakers.

Jai Courtney: Joining Jason at the ‘Terminator Genisys’ premiere, Jai had the same sartorial idea in his double-breasted tan Salvatore Ferragamo suit, likewise worn with an unbuttoned dress shirt. Sadly, his look was also similarly rumpled and lacking in polish.

Who Was Your Best Dressed At The 2015 BET Awards?