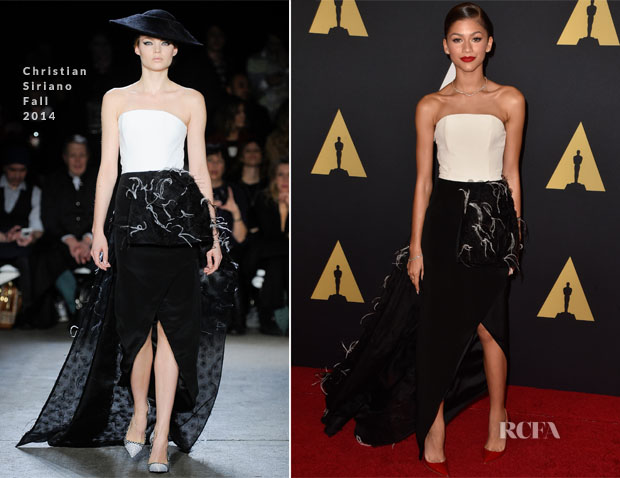 The Academy Of Motion Picture Arts And Sciences’ 2014 Governors Awards held at The Ray Dolby Ballroom at Hollywood & Highland Center on Saturday (November 8) in Hollywood, California seemed very much like a grown-up-folks affair, yet Zendaya Coleman more than held her own on this red carpet.

Never one to fade into the background, the actress/singer wore a Christian Siriano Fall 2014 strapless gown with a cream bodice and skirt infused with plenty of Siriano drama.

Not only does it feature an asymmetrical slit, but it’s also flocked with feathers for added drama, though not the usual confusing high-intensity drama we are used to from Zendaya.

She was cool, calm and composed, allowing the dress to do all the talking, effortlessly styling the look with a bold red lip to match her Louboutins.

I think she’s very much getting into a more consistent stride now.