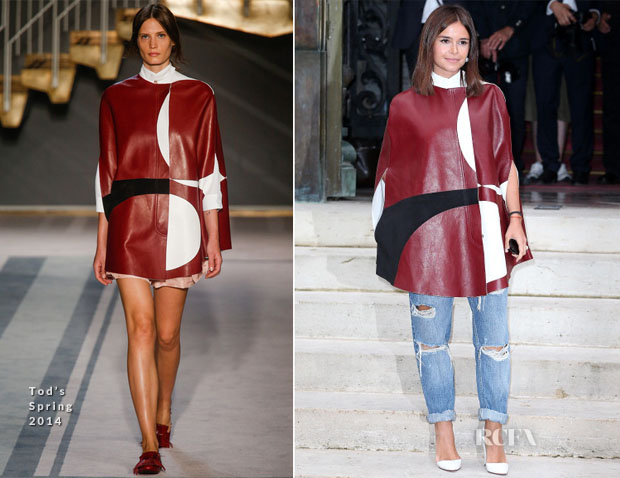 Miroslava Duma was a near-constant presence on the front row at Fall 2014 Couture Fashion Week in France this past week. The Russian style-setter showed a mild obsession for glorious capes and voluminous silhouettes which later made way for a trio of more feminine skirts and dresses—all perhaps a sign of the Paris weather, as well.

Look 1: At the Atelier Versace runway presentation, she bucked convention (being bold, body-con and beaded, as per Versace), she showed her curves via a geometric, tri-colour burgundy, black and white Tod’s Spring 2014 cape made casual via distressed, ripped and cuffed jeans and white pumps. 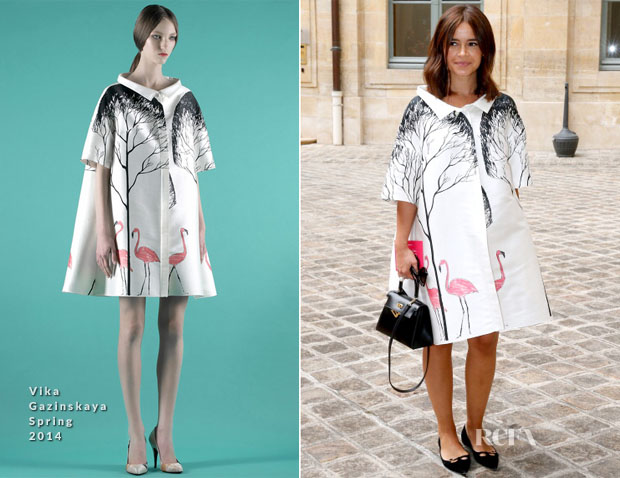 Look 2: Taking a playful turn at the Schiaparelli show, she debuted a Vika Gazinskaya Spring 2014 cape-like coat emblazoned with a whimsical flamingo and tree print. Prim black flats and a structured handbag added a classic touch to the boxy fun of the coat. 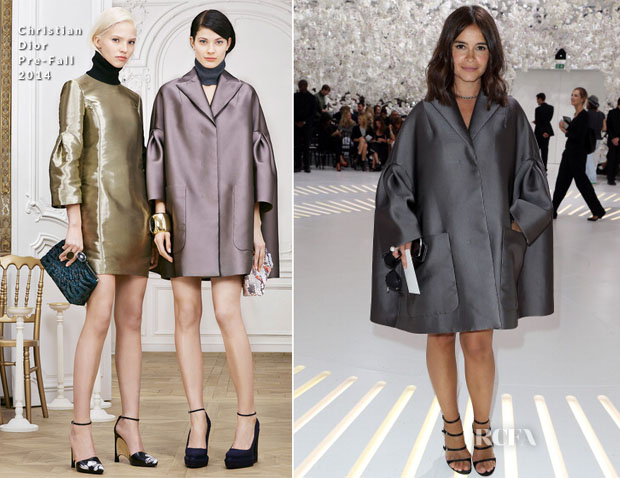 Look 3: On this occasion, she wore one of the designer house’s own pieces at the Christian Dior show, where her Dior Pre-Fall 2014 consisted of a metallic slate grey cape with gathered, exaggerated sleeves. Strappy black sandals, a pair of shades and a small clutch were all she needed in the way of accessories. Mira’s so petite, though, that this particular cape could fit two more of her inside. Is the silhouette too overwhelming? 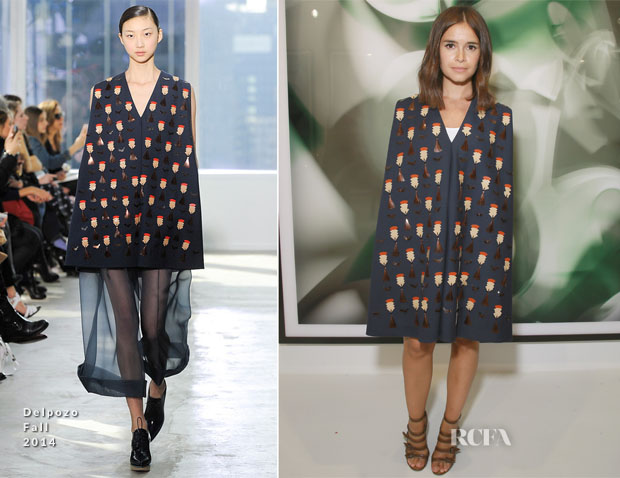 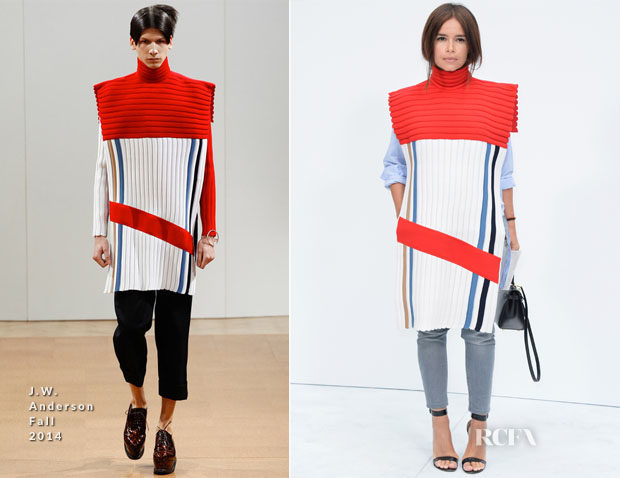 Look 5: At the Chanel show, Mira might have worn her most impactful look of the week with a graphic, ribbed turtleneck sweater from the J.W. Anderson Fall 2014 menswear collection. She wore the statement piece over a blue shirt and skinny jeans, but really it was the massive red bib-like treatment that garnered the most attention. 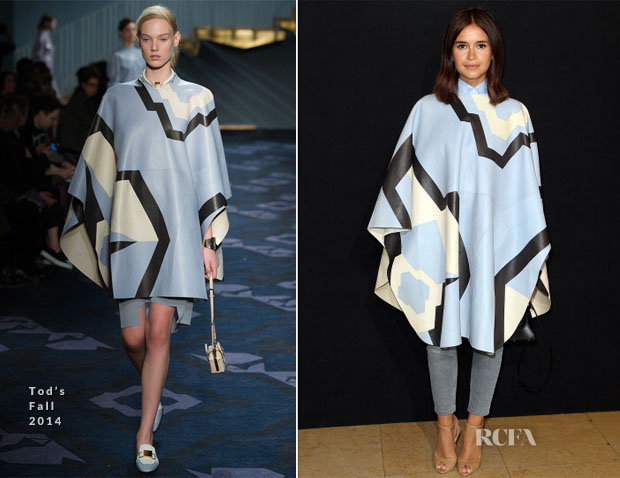 Look 6: Returning to Tod’s for inspiration, she attended the Armani Prive show in a baby-blue cape with an exploded black and cream ethnic print was from Tod’s Fall 2014 collection. Nude Paul Andrews shoes disappeared into the background to let the pancho take centre stage. 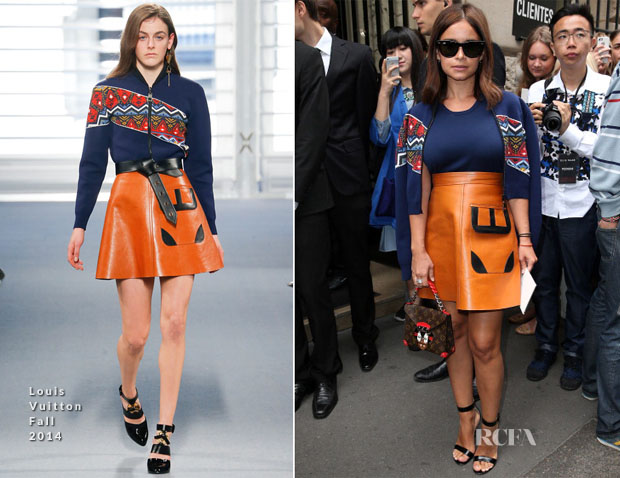 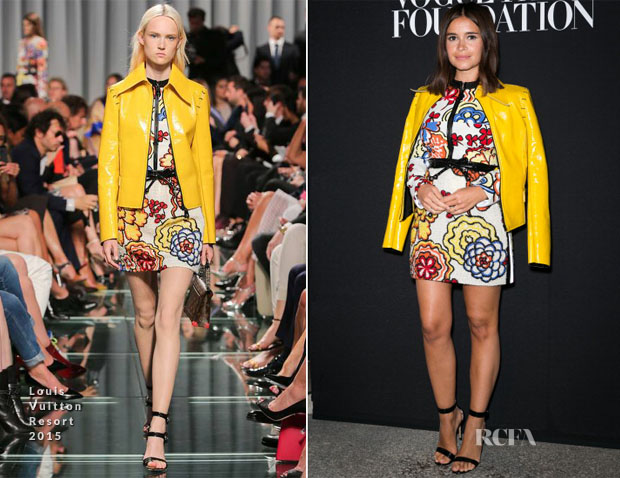 Look 8: Miroslava popped onto the scene at the Vogue Foundation Gala in a lively and colourful Louis Vuitton Resort 2015 look, characterized by a mini-dress printed in bold stencil florals and a sunny-yellow, patent leather blazer. 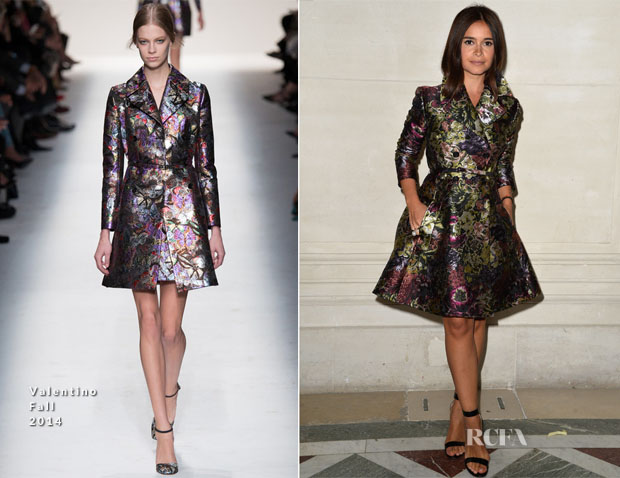 Look 9: Donning a Valentino Fall 2014 look at the Valentino show, she was chic in the glossy jacquard coat dress featuring a moodily colourful floral and butterfly pattern. You may recall that Blake Lively wore the same piece a few months ago.