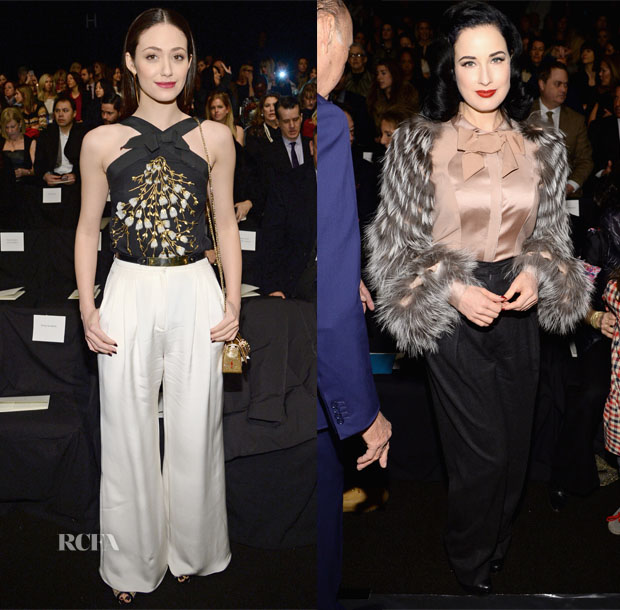 Carolina Herrera’s Fall 2014 show during New York Fashion Week took place on Monday (February 10) and, as expected, it drew a celebrity front row full of her most loyal fans.

Emmy Rossum: With so many memorable Carolina Herrera dresses under her belt, Emmy was no doubt shopping for her next red carpet look to be deemed BDOTW worthy. The actress looked uberchic, taking to the front row wearing a Carolina Herrera black-and-gold embroidered halter blouse and ivory wide leg pant with gold belt detail from the Resort 2014 collection. A few of you had mentioned that the last few red carpet appearances from Emmy haven’t exactly floated your boat for one reason or another, but I’m sure you will agree that this outfit puts her firmly back on track. Christian Louboutin ‘Lagoula’ t-bar sandals and rose-gold ‘Sweety Charity’ mini glitter bag with bow detail accessorized her look.

Dita Von Teese: The burlesque star caught the Carolina Herrera bug about 6 months ago, following her attendance to the Spring 2014 show and she continued her love affair on Monday afternoon. She wore a colour other than black when she selected this pink silk mikado blouse with silverfox fur sleeves and bow detail styled with a grey wool flannel pleated pant. Every thing else (hair and makeup) was business as usual. 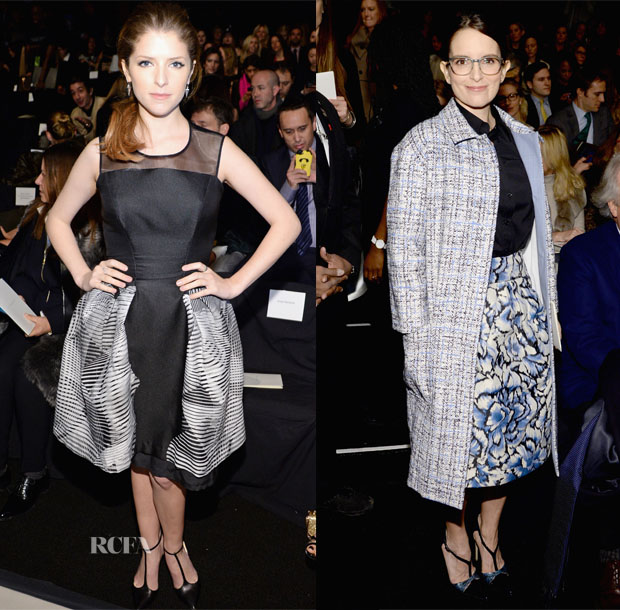 Anna Kendrick: Having loved the last few of Anna’s looks without question, this one made me saying mmmm… Her spiral morph jacquard party dress was perhaps not the most flattering or interesting choice.