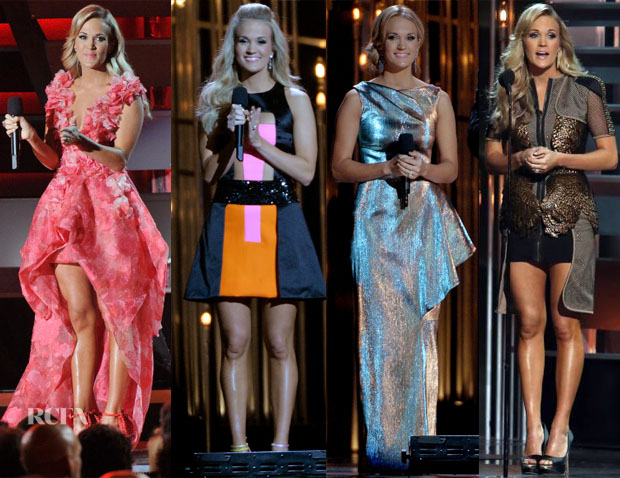 Carrie Underwood stunned on the red carpet of last night’s 47th annual CMA Awards, hosted at Bridgestone Arena in Nashville, Tennessee. But that was only the beginning of the co-host’s impressive fashion run, as she made a grand total of eight wardrobe changes during the show. Surprisingly, she also managed to stay out of pageant land for most of the evening, as well.

Carrie kicked off the night with a cotton-candy confection of a dress; a pink petal-laced number by Christian Siriano. She accented the plunge-front, high-low gown with Brumani jewels, matching pink Christian Siriano sandals and a bubblegum-lacquered lip. Even though the look was sweet, it didn’t cross over into overly saccharine territory, perhaps due to the edgier silhouette.

Next up, she cut things short in a Georges Chakra Spring 2013 Couture navy cutout frock, with pink and orange colour-block panels and a sequin waistband. Sherbet-hued sandals from Christian Siriano and David Yurman jewels, along with a half-up, half-down ‘do, added the finishing touches.

Her shiny metallic Talbot Runhof wrap column dress was perhaps her most glamorous. She accessorized the glittery gown with a giant Baccarat ring and Sutra earrings, along with Ryan Haber shoes. A low side ‘do contributed to the old Hollywood appeal.

Carrie showed off her legs in one of her more daring ensembles of the evening from Indian designer, Alpana Neeraj. She complemented the sporty-sultry, bronze sequined jumper dress, which featured an exaggerated step hemline, with Rupert Sanderson peep-toe heels and a Melinda Maria ring. Her long, blonde waves and pretty makeup eased some of the edginess, though. 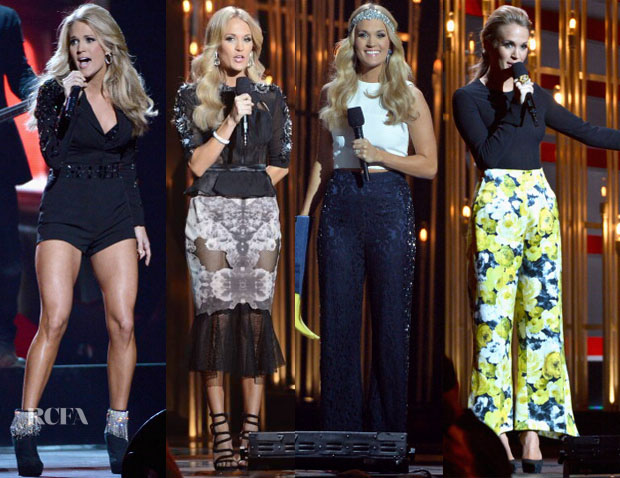 If you thought her last number was leggy, Carrie really put her pins on display in a Chagoury long-sleeve romper and Loriblu sparkling, fringed booties. The outfit was indeed a dramatic performance piece—perfect for the songstress’s own performance at the show.

Showing off another Alpana Neeraj look, she quick-changed into an embellished, sheer-effect dress with a tulle-accented hemline, paired with strappy Giuseppe Zanotti sandals and sizable David Yurman statement earrings. The complex detail of the frock may have been better seen with an updo, but there may have just not been time for a hair-change, as well.

Saying sayonara to the skirts, Carrie stepped out in a embossed and embellished Badgley Mischka Spring 2013 navy cocktail pants, which she wore with a white cropped top from the same collection. Dana Rebecca Designs jewels, a retro sparkling headband and Stuart Weitzman shoes completed this shiny, free-spirited look.

Again trotting out a pants-centric number, she capped off the evening in an Elena Reva long-sleeved top and funky, floral-printed pants, rendered in a bright palette of blue and chartreuse. David Yurman jewels once again made an appearance, alongside Stuart Weitzman pumps.

Miranda Lambert and Carrie Underwood At ...

Carrie Underwood In Stello By Stephanie ...