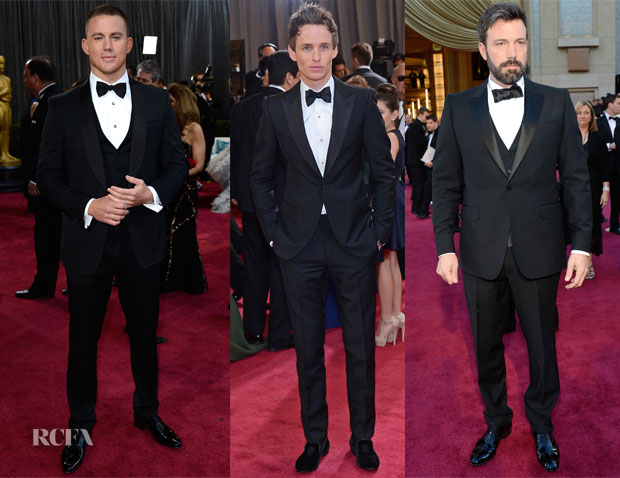 While the women looked absolutely gorgeous at the 2013 Oscars, the men used the biggest black tie event of the year to showcase some truly dapper looks. A large majority of the men stuck to the classic black and white, as opposed to navy and grey, and it paid off. With all the cleaned-up looks, it was surprising to see that the most popular trend of the night was facial hair. From full beards to scruff, the men of the Oscars made a manly statement.

Channing Tatum: Before dancing with Charlize Theron in the opening, the popular actor donned a nicely fitted Gucci made-to-order navy three-piece tux with Martin Katz studs and cufflinks. His outfit featured a classy shawl lapel and shirt studs. He rocked his tux all night with a huge smile thanks to his glowingly beautiful pregnant wife, Jenna Dewan-Tatum.

Eddie Redmayne: Here’s the one you’ve all been waiting for. The always-dapper Eddie Redmayne arrived in a slim-fit Alexander McQueen black tuxedo with wide peak lapels. Like he’s shown over the past few months, Eddie knows how a suit should fit, and this tux fit perfectly. Finishing off his look with a tribute to the old school, he wore gold studs and, my favourite part, black tuxedo slippers.

Ben Affleck: That fantastic beard is back. The director and producer of Best Picture winner ‘Argo’ wore a Gucci black three-piece tuxedo that featured peak lapels. With his black bow tie, Ben wore a white shirt with a wing-tip collar. The pants could have been a bit shorter, but what he lacks in tailoring he makes up for in facial hair. Ben’s wife, Jennifer Garner, also wore Gucci to the event. 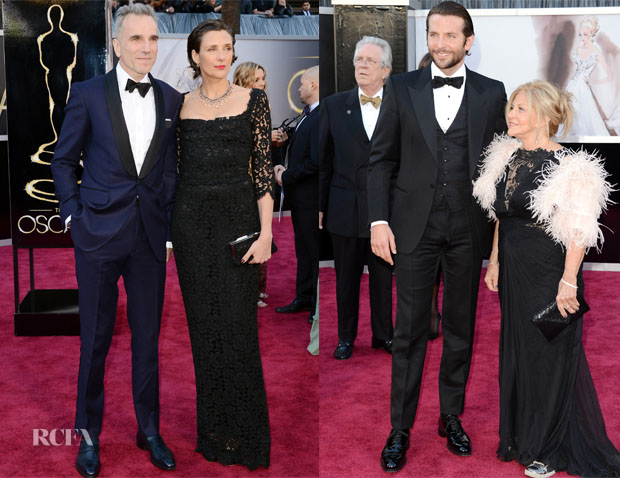 Daniel Day-Lewis: The actor looked dapper as he collected his Best Actor award wearing a custom-made Domenico Vacca suit. It has since been revealed that the actors initials were stitched into the suit, and that he requested high-waisted trousers, a preference of his.

Bradley Cooper: Channelling old-school Hollywood glamour, the Best Actor nominee slicked back his hair and wore a custom Tom Ford black three-piece tuxedo. He finished it off with a crisp white shirt, black studs, and a thick black bow tie. Bradley has had trouble with getting the right fit on his pants, but the perfect tailoring and the wide peak lapels made for an incredible look at the Oscars. Tom Ford was also his choice for the SAG Awards. 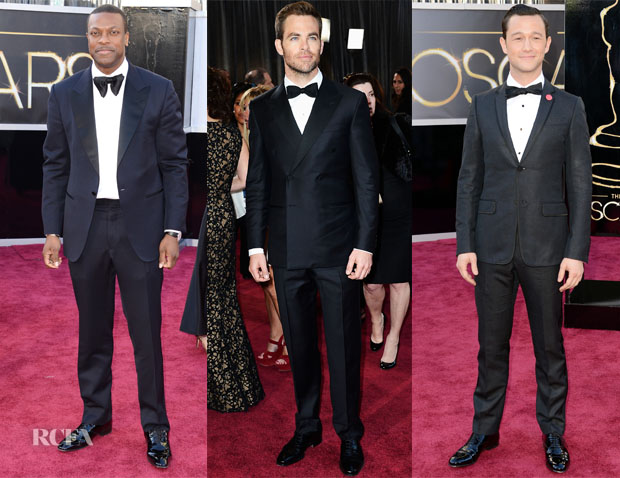 Chris Tucker: The actor clearly has something for wide lapels and droopy bow ties. This navy tuxedo looks to be the exact same one, and is worn the same way, as the tux he wore to the BAFTA Awards earlier this month. I’m still not loving it, and I still wish he would button his jacket.

Chris Pine: Again in Ermenegildo Zegna, Chris Pine was one of the few to opt for a double-breasted tux. He looked handsome as a presenter in his well-tailored black tux, white shirt, black bow tie and, like almost everyone else, a little scruff.

Joseph Gordon-Levitt: In attendance as a performer, the 32-year-old actor wore a Gucci black notch-lapel tuxedo. With his tux he wore a white shirt and a narrow black bow tie, which he said he didn’t tie himself. While on the red carpet, Joseph confessed he did not know how to tie a bow tie, so ‘Lincoln’ co-star Sally Field had to tie it for him. Black studs and a red lapel pin finished off his look. 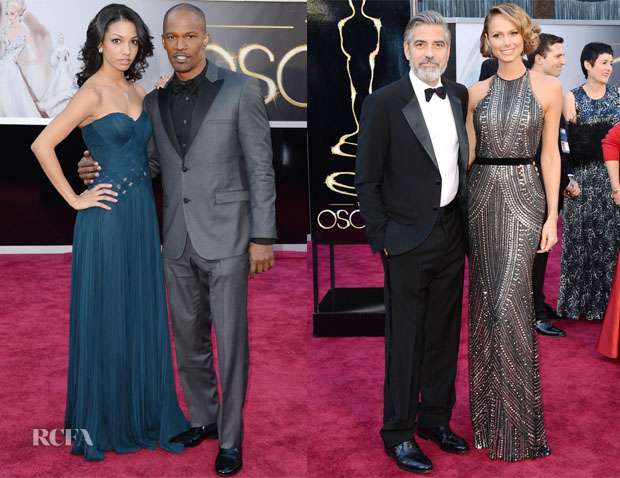 Jamie Foxx: As what seemed to be the only man not wearing black or navy, the star of ‘Django Unchained’, joined by his daughter, sported a Calvin Klein grey tuxedo with black peak lapels. He even skipped the white shirt and chose to go with black. I’m glad he changed it up and went with grey, but there are two things about this look that bother me. First off, he fastened both buttons on his jacket, and secondly, he wore a sequinned black bow tie. He wasn’t the only man in the past week to attempt a sequinned look.

George Clooney: Few people have the star power to pull off such wide notch lapels on a tuxedo like George Clooney. As a producer of Best Picture winner ‘Argo’, George was suited up in an Armani black tuxedo alongside Stacey Keibler. His jacket fit nicely but the pants were just a bit long. The more noticeable part of this look was the way he followed the night’s trend with his well-groomed grey beard and hair. 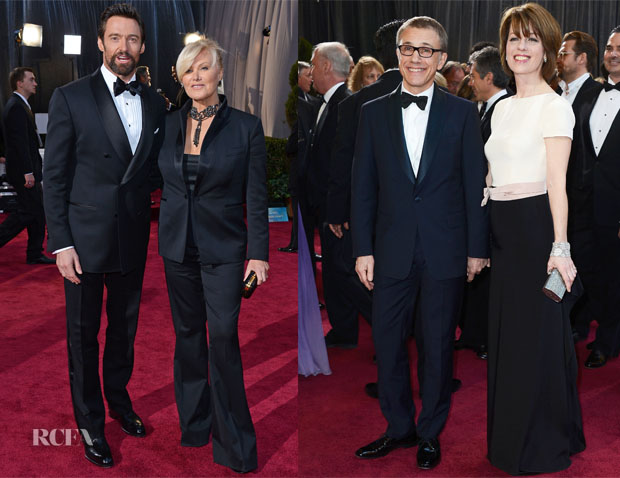 Hugh Jackman: Best Actor nominee Hugh Jackman was my best dressed because he dressed like a true movie star. A Tom Ford double-breasted, shawl-lapel tuxedo was a very bold move. It was something no one else attempted, because no one else could pull it off. Finishing off his look, Hugh wore a white pleated shirt, a black bow tie, and black studs.

Christoph Waltz: Christoph accepted his award for Best Supporting Actor in a Prada midnight-navy tuxedo with shawl lapels. Not many opted for navy, but the two-time Oscar winner made it look just as appropriate as the traditional black. He styled his tailored look with a black bow tie, a white shirt, and a black pair of frames.

Who Was Your Best Dressed At The 2013 Oscars?

29 Responses to 2013 Oscars Menswear Round Up