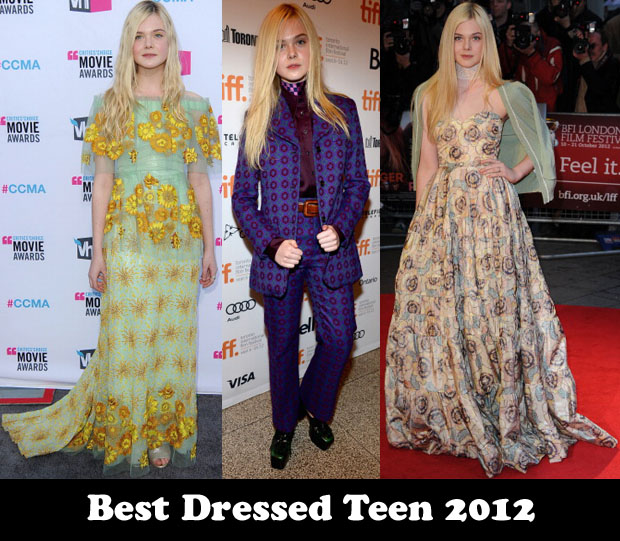 Elle Fanning has virtually stolen the spotlight from her older sister, Dakota—and from a host of other burgeoning starlets.

Not only did this precocious 14-year-old actress land a role in the upcoming Sleeping Beauty movie, Maleficent, with Angelina Jolie, she also was just nominated for a 2013 Critics’ Choice Award for her part in Ginger & Rosa.

She is no shrinking violet on the style scene either. So it’s no surprise Elle was elected the Best Dressed Teen of 2012, continuing her winning streak from last year.

A radiant presence with her alabaster skin, her deep gaze and those angelic blonde locks, Elle makes a strong impression whether she’s a girly goddess on the red carpet, a fairy tale fashionista at a film premiere, the girl-next-door for Teen Vogue or an artsy rocker chick covering the latest issue of Bullett magazine.

She achieves such grace by mixing cute with couture and princess with punk, all with a young and fun flair. And she’s not afraid to take risks. Remember, Elle was the one who colored outside the lines and dared to wear a sunny piece from Rodarte’s Van Gogh-inspired Spring 2012 collection at the 2012 Critics’ Choice Awards.

One of her most memorable ensembles of the year was actually an ode to androgyny: the print-happy Miu Miu Fall 2012 trouser suit she wore for the Ginger & Rosa premiere at the 2012 Toronto Film Festival.

It’s not hard to see why Elle has captivated the attention of film directors and fashion designers, carving out a glowing role in the movie biz and in the style world with more panache than starlets two or three times her age.

Posted by Rachel Watkins on December 24, 2012 In: Best Of, Elle Fanning