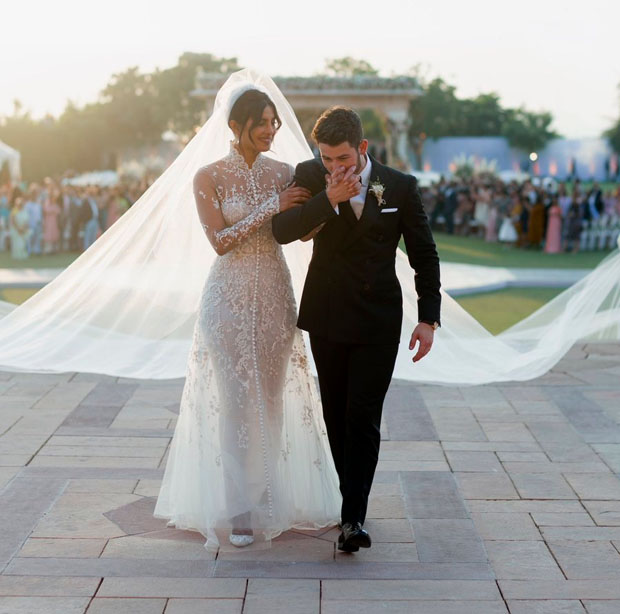 Newlyweds Nick Jonas and Priyanka Chopra released the images of their three-day long wedding ceremony, that was blend of the cultures from the couple’s families, and they both dressed in the appropriate ensembles to match.

For the Christian ceremony on Saturday (December 1) at the Umaid Bhawan Palace, the bride and groom (and the entire wedding party) wore Ralph Lauren, who, until now, had only designed three wedding dresses in the last five decades (his daughter, daughter-in-law, and niece were the lucky trio).

This was a very sweet gesture as the couple first publicly met back in 2017 as Ralph Lauren’s guests at the Met Gala, so it seemed only logical that the designer be involved in their wedding day.

Her hand-beaded and hand-embroidered dress, featured floral and scroll motifs and lace-effect tulle appliqués with scalloped sleeves and a high-neck collar. I love the Indian influences, the lightness of the dress and how the look was topped off by a 75-foot-long tulle veil.

Hand-stitched into the embroidery design were 8 words and phrases, specially chosen by the Bride. 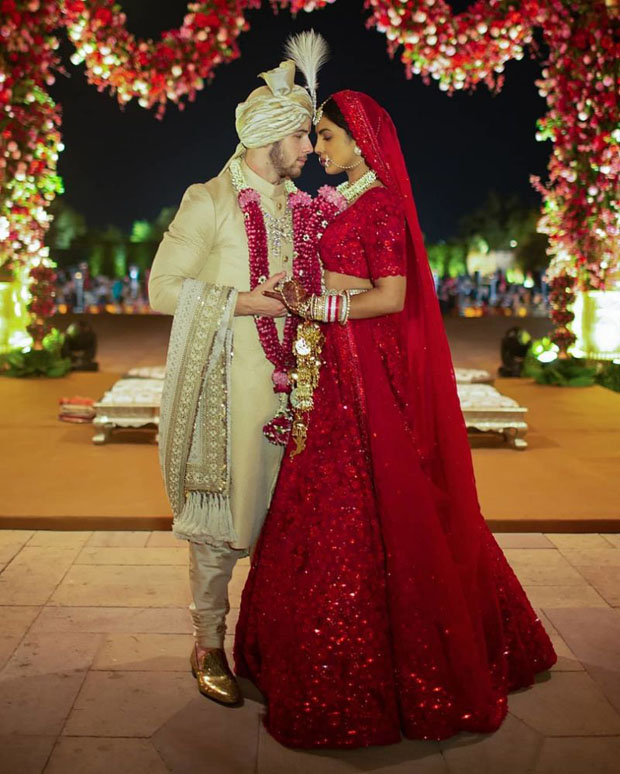 For the Hindu bridal ceremony that took place on Sunday (December 2), Priyanka wore a traditional red lehenga designed by Sabyasachi.

The bride requested that Nick’s name, and her parents’ names (Ashok and Madhu) be sewn into the lehenga’s waistband.

“For the Indian wedding, I wore Sabyasachi. I always knew I wanted a red traditional silhouette for my wedding but Sabya brought in incredible French embroidery to the mix and with incredible jewelry and Western-inspired veil it was just such an amalgamation of who I am,” Chopra told People.

Nick wore an ensemble that consisted of a traditional hand-quilted silk sherwani with a chikan dupatta and chanderi tissue safa, complete with a rose-cut kalgi and diamond necklace from Sabyasachi. The couple both wore Christian Louboutin shoes.

Priyanka looks stunning in both gowns, but I’m a sucker for tradition, so I’m swept away by the Sabyasachi red lehenga.