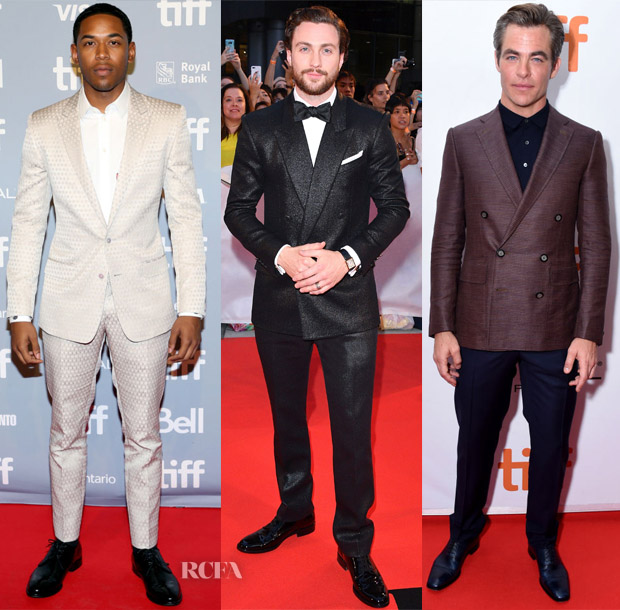 Here is our final menswear roundup this week which sees the majority of the fellas opt out of wearing a tie.

Kelvin Harrison Jr.: Not following the dark suit trend, this was quite a strong Dolce & Gabbana look for Kelvin at the ‘Monsters and Men’ Toronto International Film Festival premiere. I just wish that the shoes weren’t black. They are such an harsh ending to a beautifully textured suit.

Aaron Taylor-Johnson: Speaking of texture, I’m marveling at the sheen coming off Aaron’s Givenchy Fall 2018 suit for the ‘Outlaw King’ Toronto International Film Festival premiere. This was perhaps the most formal look during the festival for menswear so far, but no one can accuse him of overdressing when he looks this sharp.

Chris Pine: Joining Aaron at the ‘Outlaw’ premiere, Chris was looking very debonair in his Canali suit. I know some of you aren’t huge fans of double-breasted blazers, but I love everything about this look especially the contrast of the striped brown blazer against the inky blue. We always want guys to switch things up. It appears someone is listen. Christian Louboutin’ Cousin Greg’ navy shoes completed his look. 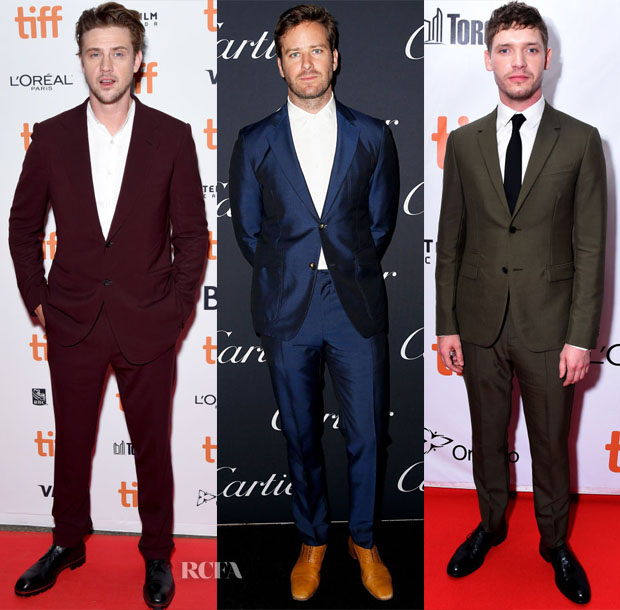 Boyd Holbrook: The actor was part of the no-tie crew dressed in a warm Bordeaux suit from dunhill London for the Toronto International Film Festival of ‘The Predator.’

Armie Hammer: Joining Zoe Saldana and Lily Collins at the Cartier Juste Un Clou New York event, I love the colour, but not the fabrication of his blue suit. The tan Christian Louboutin ‘Greggo’ shoes did provide a nice contrast.

Billy Howle: Joining his co-stars at the ‘Outlaw’ premiere, I almost wish Billy had opted to go without a tie with this Valentino suit, or just worn one that was better co-ordinated to that moss-green colour.