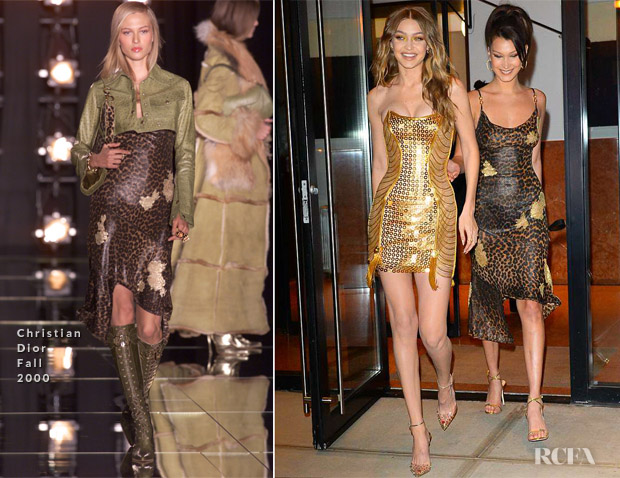 Gigi Hadid recently celebrated her 23rd birthday with her sister, Bella Hadid, at a party in New York City on Monday (April 23).

Gigi Hadid: The birthday girl stole the show in her gold Atelier Versace mini-dress that was embellished with golden thread and disks along with two iconic Medusa buckles at the bottom. Full of sexiness, sass, and shine, this was everything a modern golden-girl look should be. I’m sure she had a blast wearing this little number. Christian Louboutin ‘Spikoo’ ankle-strap pumps along with warm, golden-metallic eye makeup completed the look that lit up the night.

Bella Hadid: I love how Bella let her older sister have the brightest focus, but still had some fun with her look from the Christian Dior Fall 2000 archives. The sultry slip dress proved that animal print is forever a classic, and the leopard tones and metallic patchwork were perfectly coordinated with Gigi’s look.