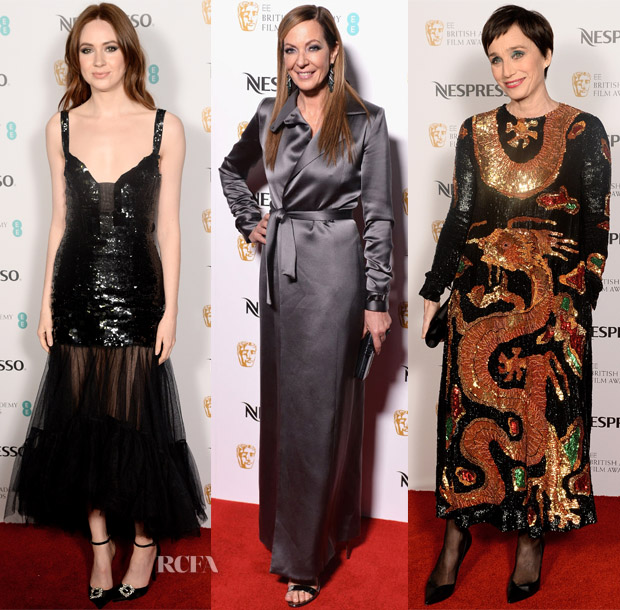 There was no shortage of exciting looks at the EE British Academy Film Awards nominees party at Kensington Palace on Saturday (February 17) in London, England.

Karen Gillan: The ‘Doctor Who’ actress shimmered in a Temperley London gown. Despite the all-black colour palette, this feels like a few different dresses in one look. It’s too bad that the tulle skirt gives the appearance of weighing down the top part.

Allison Janney: The Best Actress in a Supporting Role nominee ditched the gown in favour of an August Getty trench dress. The gray number had a marvelous lengthening effect which showcased her statuesque beauty. It was beautifully cut and as sophisticated as any dress. If I must find fault, I wish the sleeves were shortened to eliminate the bunching. Nine West shoes, a Judith Leiber clutch and Maxior tourmeline earrings added more pizzazz.

Kristin Scott Thomas: Another Best Actress in a Supporting Role nominee, the beauty turned heads in a Valentino dress. The dragon-inspired design nods to Chinese New Year and projects a joyful opulence. The style hails from the same Pre-Fall 2018 collection as Greta Gerwig’s gown. 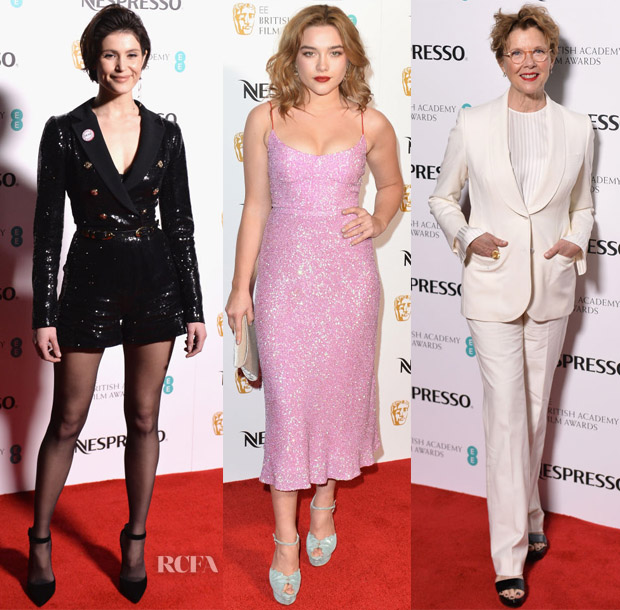 Gemma Arterton: The BAFTA presenter wore an Elie Saab playsuit with Wolford tights, Pollice Lee shoes and Diane Kordas earrings. The sparkle enlivened the all-black colour palette, lending it a glamorous, formal sentiment. The gold buttons and belt nod to military references creating a sharp finish. She topped the look with an ERA 50:50 pin, which is for equal representation for women on UK stages and screens by 2020.

Florence Pugh: The Rising Star nominee also embraced shimmer with a twinkling pale pink dress and silver shoes. Unfortunately, the weighty platform sandals compete with the glistening finish of the frock. A red shoe would have been much more cohesive.

Annette Bening: White is a favourite of the actress and she showed it off in a crisp suit. The look exudes a sophisticated elegance with her gold accessories and glasses popping against the snowy fabric. 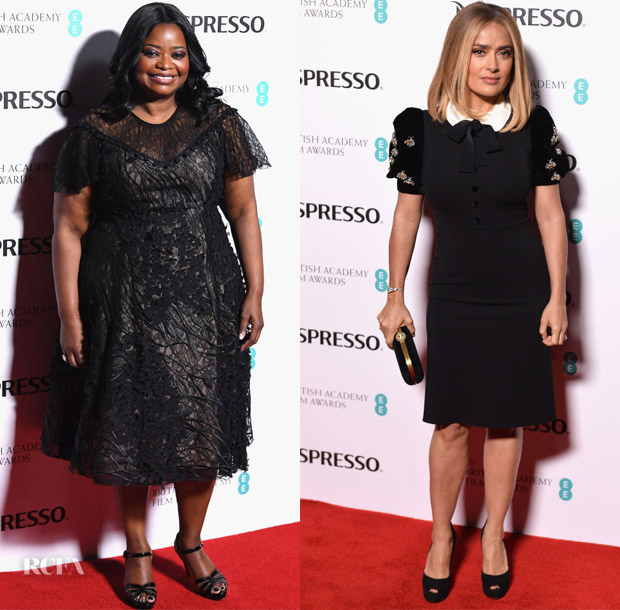 Octavia Spencer: The actress knows what works for her and this black dress certainly fits her M.O. The textured fabric has a dynamic effect which encourages the eye to take in all of the elements of the piece. The lace neckline drew attention to her face and that radiant smile.

Salma Hayek: I’m sure many will be discussing the actress’s light bob. That and the jewelled sleeves are really the only talking points in this look. Unfortunately, it comes across as far too casual for the event and dare I say a bit schoolmarmish, even with the form-fitting silhouette. It’s a pity.

Allison Janney Stuns At The ‘Ma...