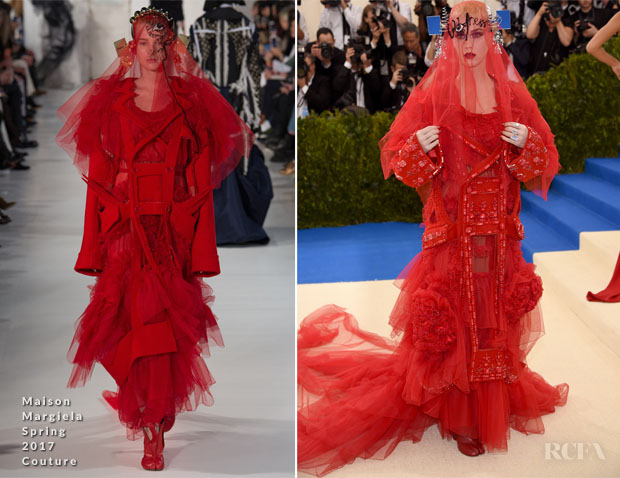 As one of the 2017 Met Gala co-chairs, Katy Perry was one of the first to hit the red carpet—which is actually blue this year—on Monday (May 1) in New York City.

The avant-garde dress code, in celebration of the Costume Institute’s new exhibit ‘Rei Kawakubo/Comme des Garçons: Art of the In-Between,’ was not lost on Katy as she took it to the nth degree in a fiery-red Maison Margiela Spring 2017 Couture veiled design.

While the look cannot be faulted for not making an entirely dramatic spectacle for which the Met Gala is known and loved, I do think it crossed too far into the OTT lane of the red carpet.

Adding the heavy-handed embellishment to the original design, plus what seems to be even more flurries of tulle, made Katy appear to be swimming through her own version of the Red Sea.

As for the ‘Witness’ headpiece, complete with swirled metal pieces and two side compact mirrors, it certainly made a statement—one that was nearly comical in its crafty, DIY nature.