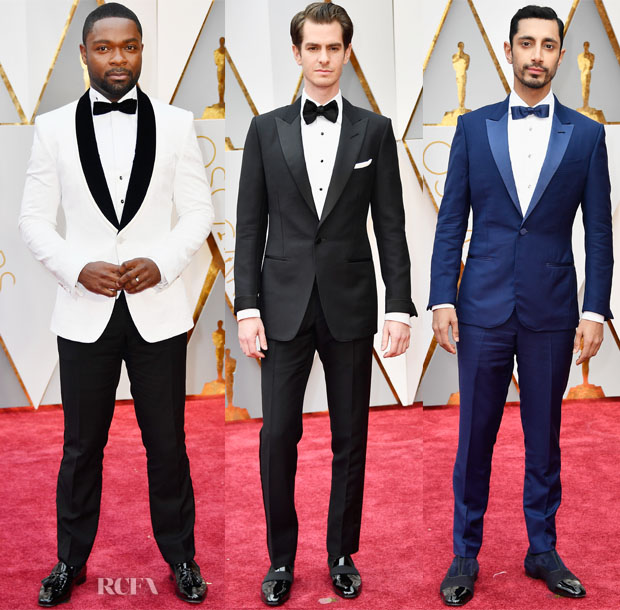 A handsome handful of guys also took to the red carpet for the 2017 Oscars on Sunday (February 26) in Hollywood, California.

David Oyelowo: The sharp suaveness of this Dolce & Gabbana tux, with its white dress jacket and contrast black labels, was undeniable. Christian Louboutin ‘Dada’ loafers capped off the look with a touch of polish.

Riz Ahmed: Our third rendition of the tux came courtesy of Riz, who took his to more colourful territory in a blue Ermenegildo Zegna Couture suit accented with Montblanc studs and cufflinks and Christian Louboutin ‘Alpha Male’ shoes. For a couture piece, I would have expected a slightly more precise fit. 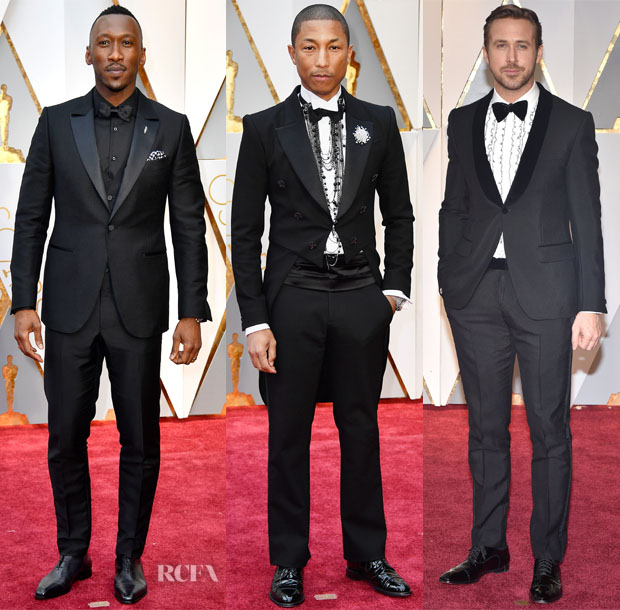 Mahershala Ali: Fetching as ever, the actor dressed to impress in an Ermenegildo Zegna Couture monochromatic ensemble with tonal contrast lapels and the pop of a printed pocket square for visual interest.

Pharrell Williams: Looking back a few seasons for inspiration, the entertainer made this Chanel Fall 2009 black wool tail coat, beads, and trousers his own. It takes a strong style personality to pull off this theatrical statement but he makes it look effortless.

Ryan Gosling: I just couldn’t get on board with the ruffled dress shirt under this midnight-blue Gucci suit, styled with Christian Louboutin ‘Greggo’ shoes—no matter how much he flashed his charming baby blues. 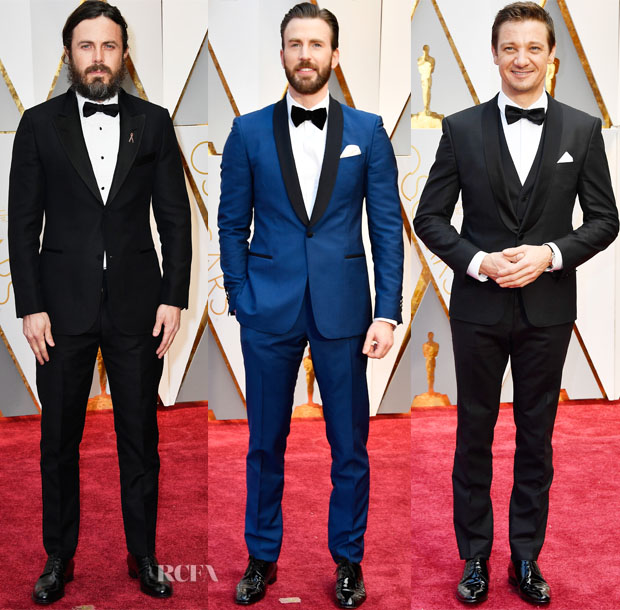 Casey Affleck: While his black Louis Vuitton tuxedo, paired with Montblanc cufflinks, was at the height of classic, handsomely refined appeal, I wish he had trimmed his woolly beard to match the sophisticated look.

Chris Evans: Striking in a blue Salvatore Ferragamo suit with contrast black lapels, Chris did tame his facial hair to suit this snazzy ensemble. He accessorized with a Montblanc timepiece and cufflinks along with Christian Louboutin Orleaness shoes.

Jeremy Renner: The actor wore another version of a three-piece look in this black ensemble. The jacket sleeves seemed a bit short—perhaps they were pushed up a bit here. But, it did work in favour of showing off the Chopard timepiece. 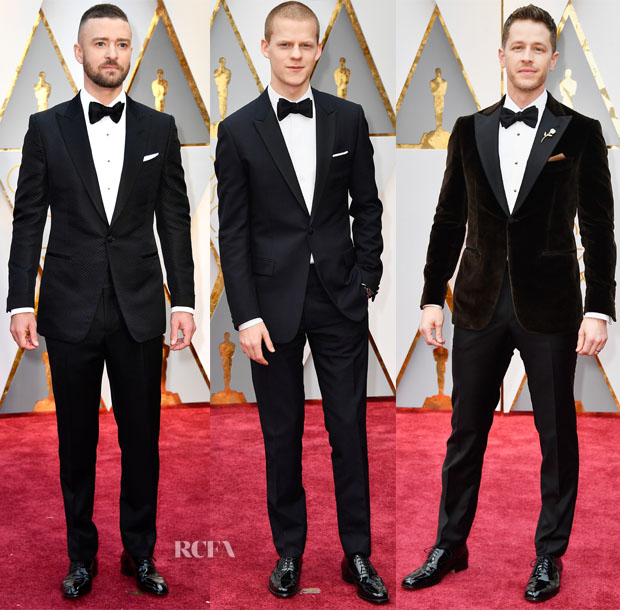 Justin Timberlake: Celebrating the elevated elegance of a traditional tuxedo, he put his best fashion foot forward in this Tom Ford design.

Lucas Hedges: Dapper in a Dior Homme black suit that nearly looked identical to J.T.’s entrance, the young actor made a fine showing. He styled the ensemble with a Montblanc timepiece

Josh Dallas: His chocolate-brown velvet jacket with contrast lapels had a plush richness to set the look apart. He added a touch of panache with the floral pin and a Montblanc timepiece. 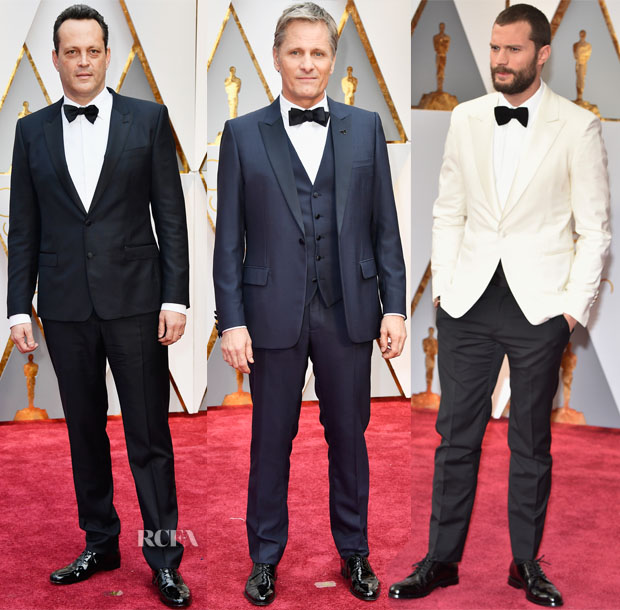 Vince Vaughn: There was something about the jacket and bow tie of this dark suit that just appeared shrunken—and not in a good way. Montblanc cufflinks finished the look.

Viggo Mortensen: The actor buttoned up in a three-piece Dior Homme suit in a dark navy shade.

Jamie Dornan: With David Oyelowo already wearing a white dinner jacket in the height of style, this ivory incarnation from Jamie had a lot to live up to. And, it couldn’t compare—especially not with the rumpled trousers. 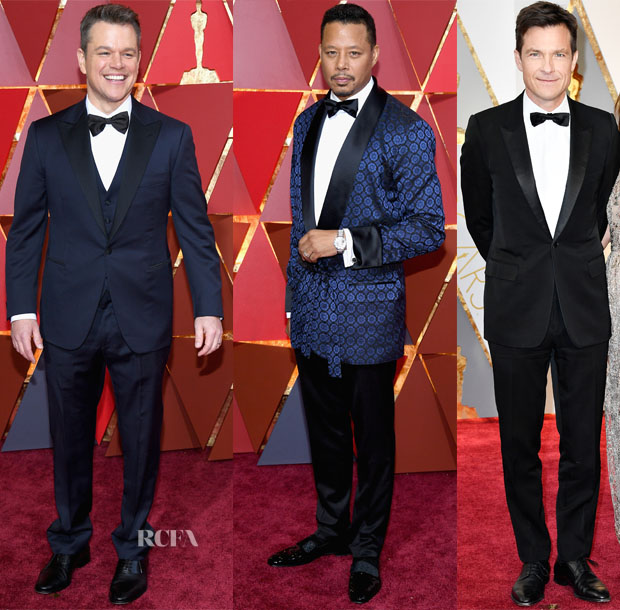 Matt Damon: I wish the fit of this three-piece Versace suit, styled with Harry Kotlar cufflinks, had been better tailored. As is, the sleeves appeared uneven and the pants were a bit long.

Terrence Howard: The actor’s look was all about relaxed and debonair elegance—an aesthetic that was primarily tied up in his patterned silk, robe-style jacket. He paired the ensemble with Christian Louboutin ‘Vittorio’ dress shoes.

Which of the Oscars men had your favourite look?