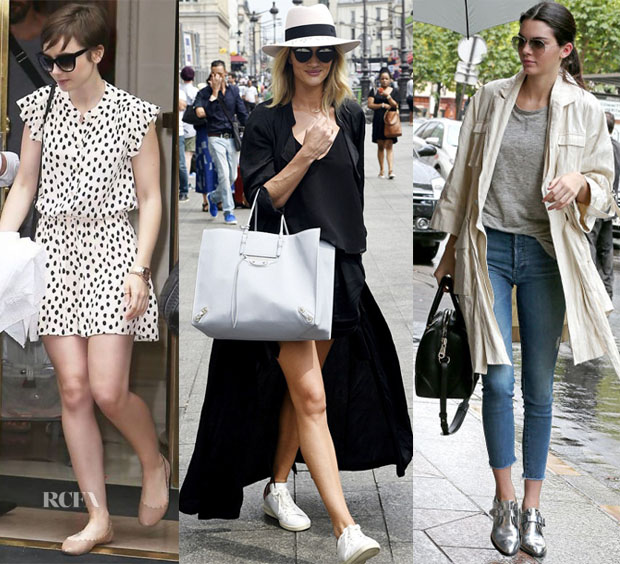 The pretty young things haven’t only been spotted in designer ensembles whilst at the front and centre of the Paris Fashion Week Haute Couture Fall 2015 shows. Away from the fashion presentations, they have switched into something more comfortable to take to the streets of the City of Light.

Rosie Huntington-Whiteley: We know Rosie can work a sexy dress, as she’s done thus far several times while in Paris, but sometimes it’s her effortless, off-duty style that’s all the more appealing for its laidback charm. Here, a perfect example, with her black Barbara Bui silk trench coat that was chicly worn with a Maison Michel ‘Virginie’ fedora, Christian Dior ‘So Real’ sunglasses, and a Balenciaga ‘Papier A4′ oversized leather tote bag during her arrival to Paris at the Gare du Nord Station on Saturday (July 4).

Kendall Jenner: Taking a break from her catwalk duties, the model played it casual in a Zimmerman ‘Seer Crush’ trench worn over a gray T-shirt and cropped, skinny Mother ‘Stunner’ jeans while out and about on Sunday (July 5). I love the added flair of the silver Barbara Bui brogues and the polish of the Givenchy ‘Lucrezia’ bag.

Heidi Klum In Barbara Bui – Out In...