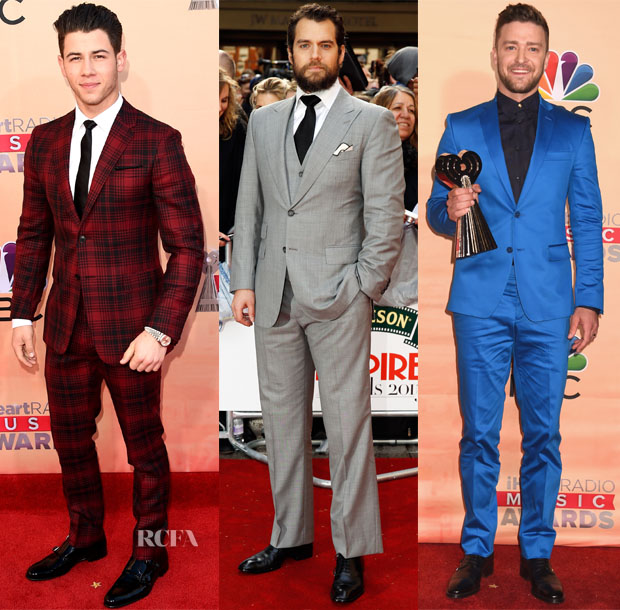 This past weekend’s iHeartRadio Music Awards and Jameson Empire Awards brought out a range of ensembles from the boys. Here, a look at their entrances.

Nick Jonas: Before performing ‘Chains’ at the iHeartRadio Music Awards in Los Angeles, California on Sunday (March 29), the singer hit the red carpet in a Valentino Fall 2015 suit. There’s no denying he looked sharp, even if the festive red plaid reminded me of the fall season rather than spring. No matter, suave style is always in season.

Henry Cavill: The actor paired that beard with a slick three-piece Tom Ford gray suit, white dress shirt and thick black tie at the Jameson Empire Awards at London’s Grosvenor House on Sunday (March 29). It was a solid look, with the small addition of the pocket square adding a nice final touch.

Justin Timberlake: As winner of the Innovator Award at the iHeartRadio Music Awards, the entertainer stood out in a bright blue Versace suit paired with a black patterned Versace dress shirt with Medusa gold detailing and black Versace dress shoes. I love seeing this electric shade on the red carpet; I just wish his pants were better tailored—and less crumpled. 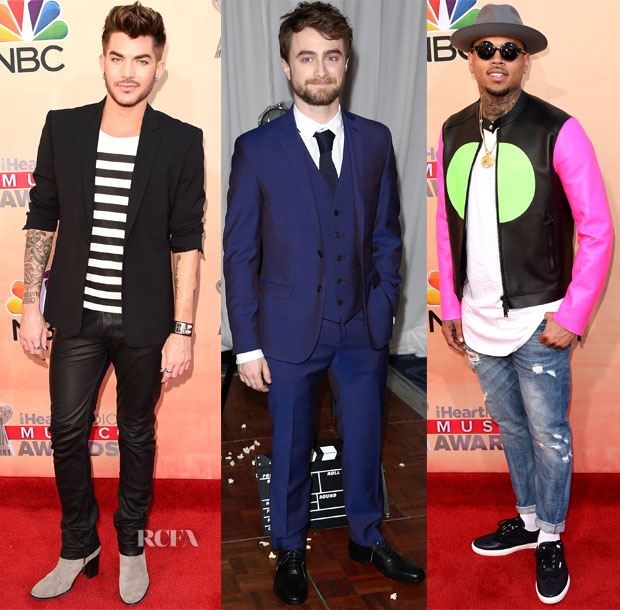 Adam Lambert: Also at the iHeartRadio Music Awards, the singer rolled up his sleeves in a rock-star look with a slight nautical edge, given the striped Saint Laurent shirting under his fitted Mugler blazer. Leather-look Margiela pants, gray Christian Louboutin boots, a studded cuff and swooshed hair completed his ensemble.

Daniel Radcliffe: Dressed in a midnight-navy three-piece suit, the actor was polished at the Jameson Empire Awards—even with that scruff.

Chris Brown: The rapper played with shapes at the iHeartRadio Music Award, where it wasn’t hard to miss his graphic Dsquared² Spring 2015 neon pink, green and black jacket worn over a baggy white T-shirt. Reflecting the circle motif in the jacket, he wore a pair of round shades. But even without those, the look would have been overcooked, even for a music awards event, beginning with the ripped and rolled-up jeans and the socks and sneakers, and ending with that gray hat that was the real head-scratcher.