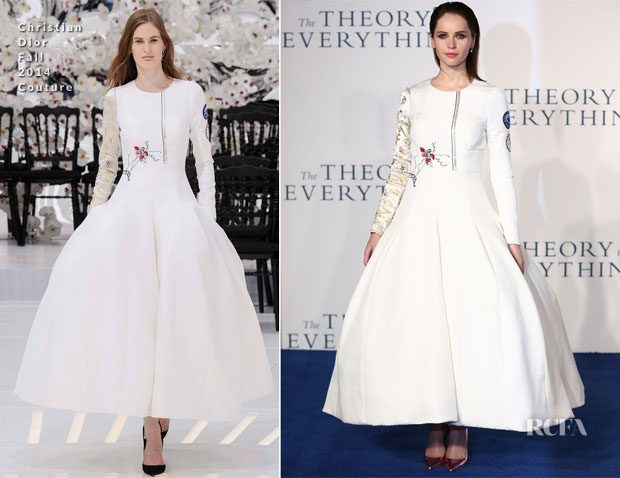 Felicity Jones took to the ‘blue’ carpet for the London premiere of ‘The Theory of Everything’ hosted at Odeon Leicester Square on Tuesday (December 9) in England.

The actress stunned in a Christian Dior Fall 2014 Couture dress that was nothing short of breathtaking.

Again breaking out of her all-black comfort zone, she wore this pristine, white quilted confection with statement embroidery. While the 18th century-inspired pannier-style silhouette wasn’t exactly figure-lengthening, the voluminous form was a risk that paid off in my view.

When styled with lavender metallic Dior pumps, a partless ’do, and a bright-pink lip, the frock fully took on modern, relevant appeal, rather than falling into an overly fussy trap.

The overall effect was one of precious doll-like quality—with a dash of edge. What say you?

Which Was Your Favourite Nicola Peltz ‘Transformers: Age of Extinction’ Promo Tour Look?