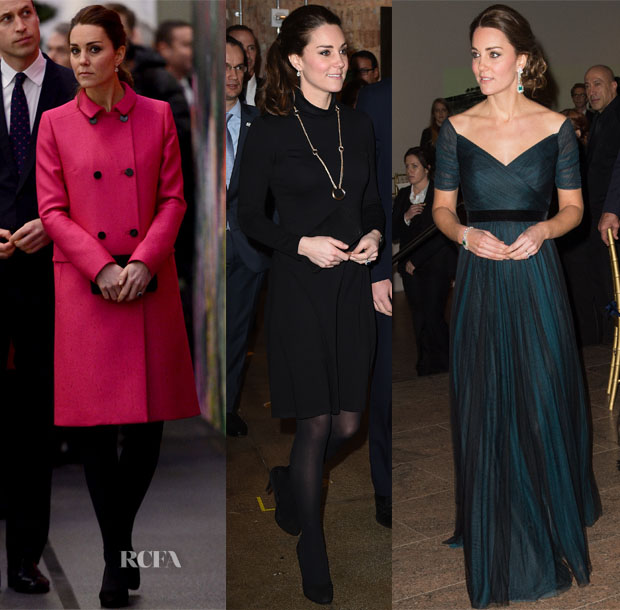 On the third day (December 9) of the official visit of Prince William, Duke of Cambridge, and Catherine, Duchess of Cambridge, to New York City the couple made several appearances.

The National September 11 Memorial Museum Visit: After grey and black we were finally treated to some colour from the Duchess. Once again she opted for a timeless winter coat courtesy of Mulberry in a classic silhouette rendered in a vibrant cerise hue. The look was of course styled with all black accessories complementing the buttons on the double-breasted design.

Creativity Is GREAT Britain’s Creative Industries Event: Her second look – revealed when she removed her coat – was a black turtleneck dress from her go-to maternity designer, Seraphine. The look was styled with her favourite Cartier Trinity necklace. You may remember that the Duchess debuted the piece at a 2012 National Portrait Gallery exhibition.

St Andrews 600th Anniversary Dinner: And finally, the event I had been waiting for. A gala dinner party that would see the Duchess blow me away in a stunning gown. Sadly, that didn’t come to pass. Her dark green Jenny Packham Fall 2013 gown accented with a black waistband was a three-peat, having been worn to the 100 Women In Hedge Funds dinner in October 2013 and the National Portrait Gallery event in February 2014. The only things of note here are her stunning emerald and diamond jewels plus that elegant updo.

While none of the looks have been bad, there was just nothing to get excited about. I would like to believe that had the weather been warmer we would’ve seen more than different coats in similar silhouettes, but even this summer we were treated to coat/dress after coat/dress so I can’t have total faith in that belief.

Catherine Duchess of Cambridge In Alexan...

Evangeline Lilly In Alberta Ferretti – ‘The Hobbit: The Battle Of The Five Armies’ LA Premiere