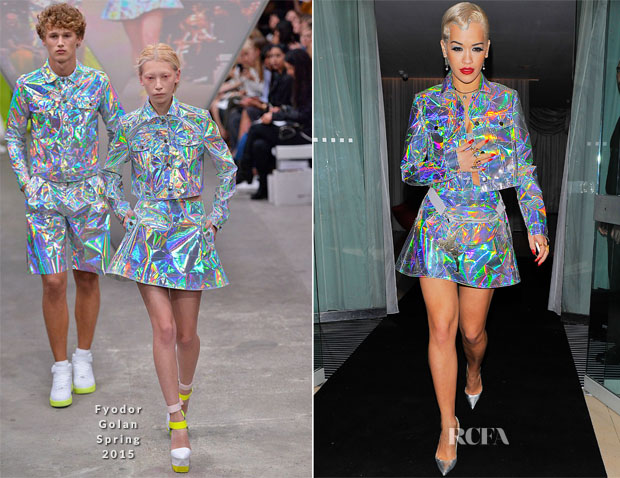 Rita Ora was spotted headed to Iggy Azalea’s concert held at the O2 Shepherd’s Bush Empire in London, England yesterday evening (September 17) before heading to the Box Nightclub for her own performance.

Diane Kruger was the first to bag herself a look fresh off the Prabal Gurung Spring 2015 runway, then Rosie Huntington-Whiteley and here we see Rita following up.

The 90s holographic trend had a mini resurgence on the Spring 2013 runways, and it looks like Rita is bringing it back for 2015.

You can’t look at this without the word futuristic coming to mind, and while this is quite a tricky look to pull off I think Rita has the personality and attitude to make it work.

Do you agree or will nothing she wears work for you?

Carly Rae Jepsen Walks Into The Light To...

Laura Whitmore In Fyodor Golan – I...

Jennifer Lopez In Fyodor Golan – ‘Am...