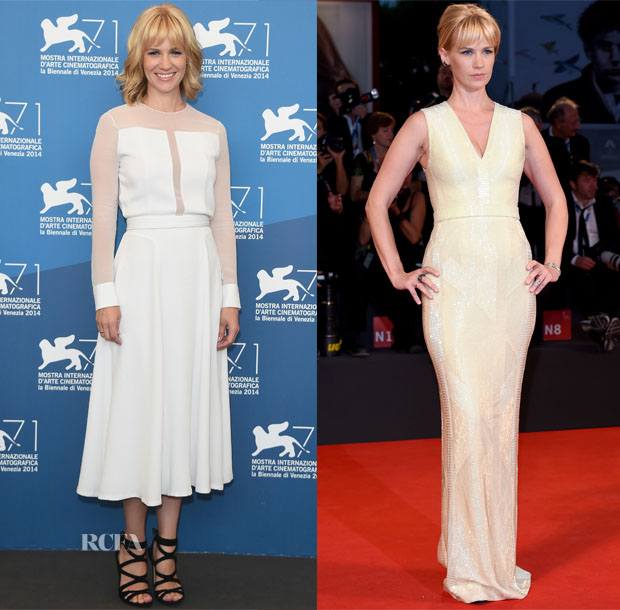 January Jones returned to the red carpet for the ‘Good Kill’ photocall and premiere, hosted during the 2014 Venice Film Festival in Venice, Italy on Friday (September 5).

Photocall: While at the Palazzo Del Casino, the actress selected a BOSS Fall 2014 ivory silk dress with sheer chiffon detailing, contrasted by Casadei black suede wrap-around, lace-up sandals and her adorable wavy long bob. Déjà vu has likely set in already, as this is a repeat feature just worn recently by Caroline Issa at the GQ Men of the Year Awards. Still, it maintained all the subtle chic factor that we saw in its first run.

Premiere: Staying in the light colour palette, January debuted a BOSS fully micro-beaded, custom V-neck column gown, accessorized with on-trend Jack Vartanian black diamond ear climbers and a Le Vian diamond ring. The shimmering, statuesque slinkiness of this gown had me at hello, although I could have done without the beehive updo.

Which look captured your attention?

The Hollywood Reporter’s Empowerment I...