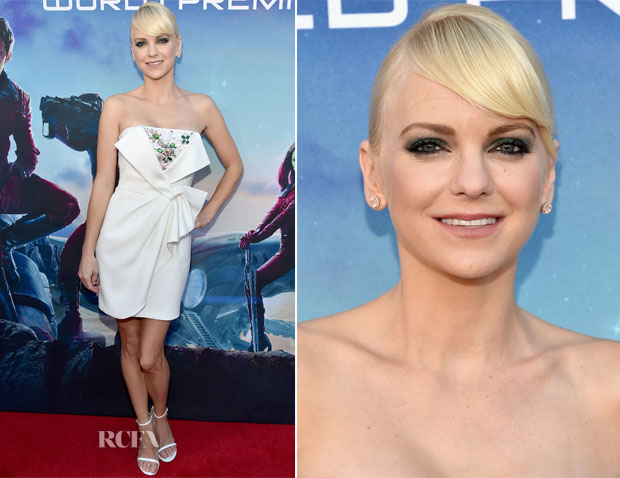 Anna Faris joined hubby Chris Pratt on the red carpet for the LA Premiere of ‘Guardians Of The Galaxy’ held at the El Capitan Theatre on Monday (July 21) in Hollywood, California.

Opting for all-white accessories, those Stuart Weitzman ‘Nudist’ sandals made yet another appearance on the red carpet, plus she added an Edie Parker ‘Minnie’ clutch.

For such a fresh, crisp look, she went in the opposite direction for her makeup, opting for dark-green eye shadow and heavy kohl-rimmed eyes. In the close up you can see that her makeup artist considered the emerald gems in the bodice when deciding upon giving her this look.

When it came to her jewels she sparkled, opting for Dana Rebecca Designs ‘Anna Beth’ earrings and a Graziela Gems ‘Alexa’ ring.