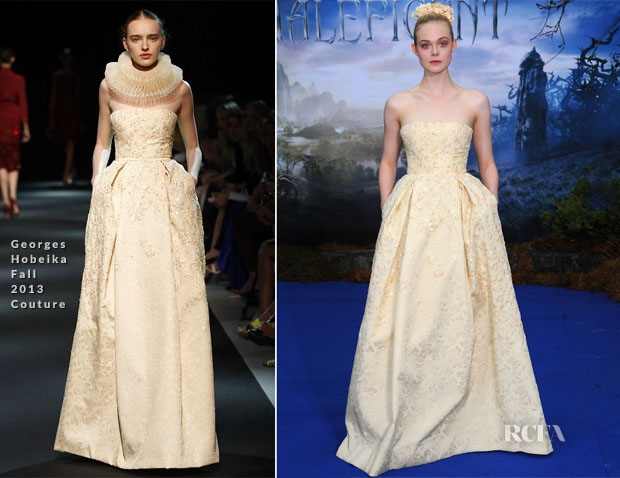 A day after attending the ‘Maleficent’ Paris photo call, Elle Fanning was at a private reception on Wednesday (May 8), where costumes and props from the Disney movie were exhibited at Kensington Palace in London, England in support of the Great Ormond Street Hospital.

No doubt paying homage to the fantasy of the film, the young starlet wore a strapless Georges Hobeika Fall 2013 Couture confection with beautifully beaded embellishment and a pleated ball skirt.

The fairy tale continued with her crown of mini flowers that tied into long ribbons down her back, while the rest of the styling was kept purposefully simple with no jewels and rose-hued makeup.

Elle Fanning Wore Rodarte To ‘The ...

Posted by Rachel Watkins on May 8, 2014 In: Elle Fanning, Georges Hobeika, Premiere, Runway To Red Carpet