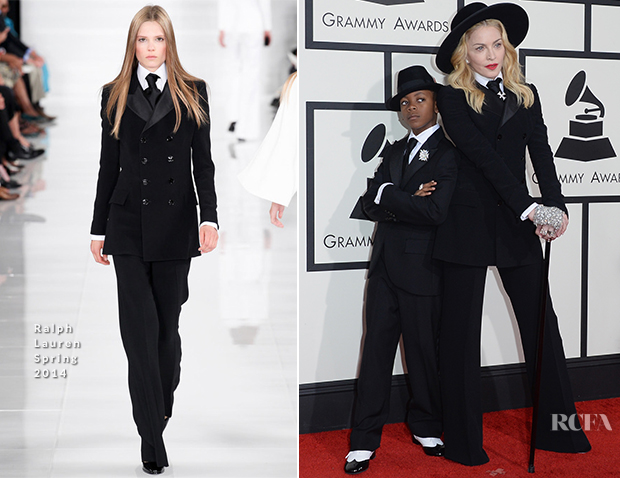 Madonna took to the red carpet at the 2014 Grammy Awards, hosted at the Staples Center in Los Angeles, California on Sunday (January 26).

The singer, who is performing ‘Same Love’ alongside Macklemore and Ryan Lewis, had quite the plus-one in her handsome young boy, David. Even more adorable—mom and son matched in an amazing mini-me moment.

They were both dressed to the nines in Ralph Lauren; he in a dapper little Ralph Lauren Boys ensemble and she in a her double-breasted, wide-leg black tuxedo hailing from the designer’s Spring 2014 collection.

She did up the ante on the runway version of the look with a host of accessories, putting her unique spin on this suit. From the Eric Javits custom designed black felt gaucho hat sitting atop her blonde waves, to the cross pendant on her black tie and the sparkling, fingerless glove by which she carried a black cane—a necessity due to a dance injury—this mannish moment had Madonna written all over it.

The pièce de résistance had to be her grill, though, which she admitted she likes to wear when it matches her outfit.

Madge has worked the tuxedo angle many times before. Are you glad to see her return to the gender-bending look again?