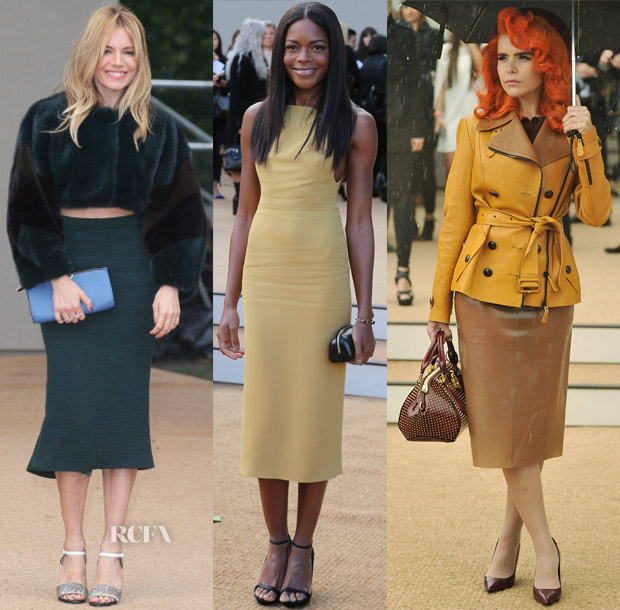 Burberry Prorsum’s pretty, English rose-themed Spring 2014 collection debuted today at Kensington Gardens during London Fashion Week. There were plenty of PYTs, and even a particular One Direction boy, who crowded the front row for the cheerful runway action.

Sienna Miller: Fully embracing the fall season, the Burberry-clad actress, who appears in the label’s Fall 2013 campaign, showed us how the midriff trend might transition to colder temps.  Her fuzzy, forest-green cropped jacket was matched to the slimmer silhouette of a classic pencil skirt in a similar tonal shade. Embellished sandals and a baby-blue clutch didn’t fit in as seamlessly as I would have liked.

Naomie Harris: Sleek and effortless, the actress wore a buttery-yellow sheath dress from the Burberry Resort 2014 collection. Accessorizing with black ankle-strap sandals and a mini-clutch, along with straight locks, she proved that simple is sometimes best.

Paloma Faith: The British singer-songwriter paid homage to the Burberry label with her Fall 2013 goldenrod trench and rubberized skirt, which she paired with a mahogany pumps and studded bag. Of course, all eyes were also on her flame-red curls, which always add an exclamation point to each of her outings. 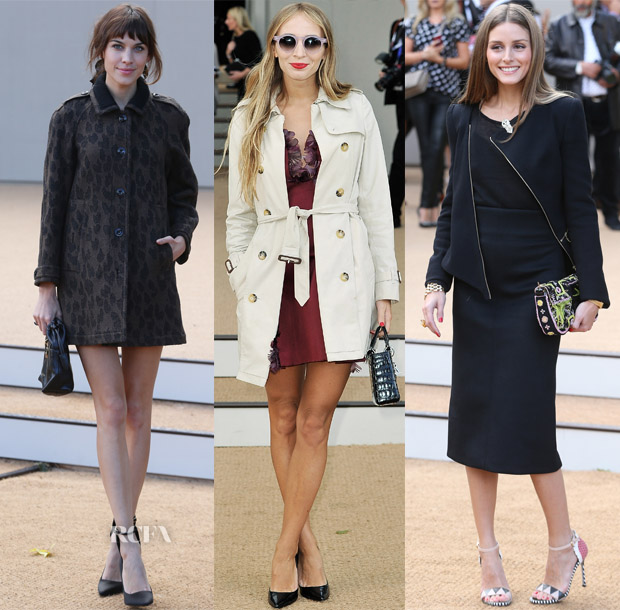 Alexa Chung: Continuing to make the show rounds, the model-DJ went for a leggy Burberry look with a patterned dark brown-and-black coat—and not much else—save for ankle-strap wedges and a black clutch.

Harley Viera-Newton: Fresh from the Christopher Kane Spring 2014 show earlier today, the DJ was in a Christopher Kane ensemble, but she did manage to add a bit of Burberry-inspired flair with her belted trench coat. Her lavender ombre shades, which we’ve seen her wear previously, as well as that coral-red lip completed the look.

Olivia Palermo: The stylista let her black dress and jacket combo be the background for her more colourful accessories, including a tribal-embroidered clutch and Sergio Rossi pink and grey patterned heels. 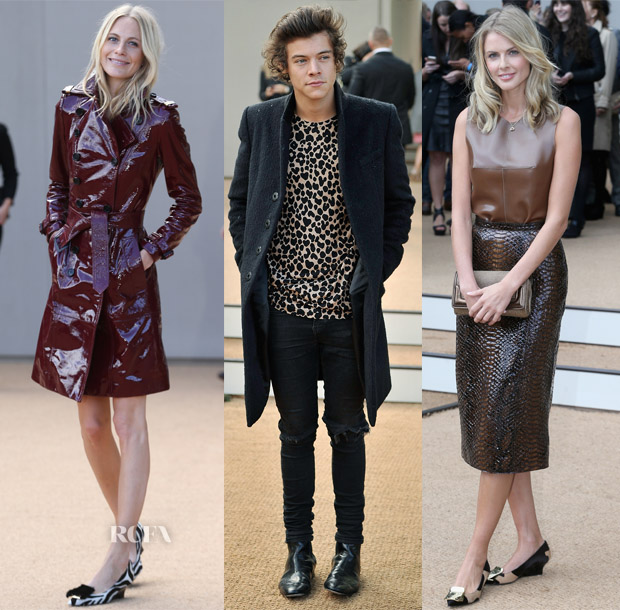 Harry Styles: The floppy-haired, One Direction heartthrob may or may not have been watching model-of-the-moment (and rumoured girlfriend) Cara Delevingne from his front-row seat at the show. But he did fit right in with his Burberry Fall 2013 leopard-print shirt, worn with a black overcoat, skinny pants and black boots.

Donna Air: The British TV presenter was refined in a Burberry Fall 2013 rubber-inspired ensemble that featured a brown shell top and a reptilian-embossed, below-the-knee skirt. A taupe clutch and kitten-heel wedges, embellished with a gold plate, finished out her classic appearance.

Alexa Chung Was Blooming At The Bird in ...