Kerry Washington for Elle US June 2013 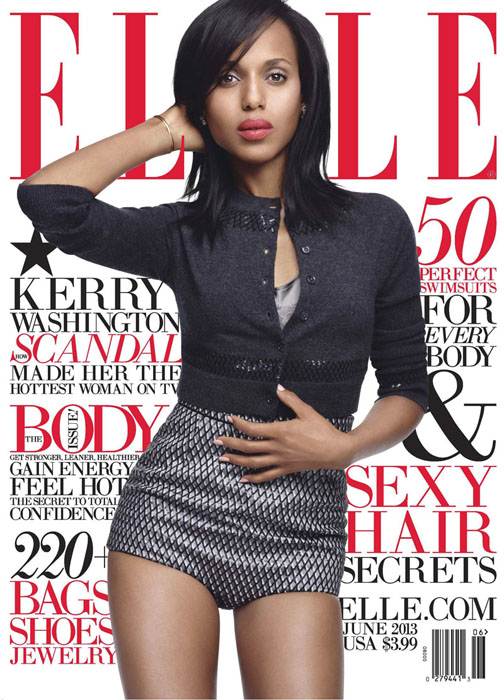 It’s surprising to learn that Kerry Washington’s Elle US June 2013 cover is her first for a major title despite having a very successful career, with recent achievements including her blockbuster ‘Django Unchained’ being nominated for an Oscar, and being the first black woman to be cast in a lead role in a network drama for ‘Scandal’, which was just renewed for a third season.

For someone who has such amazing style on the red carpet, I feel she was let down with this editorial.

The cover shot by Horst Diekgerdes which sees her wearing Marc Jacobs is just OK, but inside the mag her Tom Ford, Balmain and Armani looks could’ve all been much better.

Kerry opens up to Elle about her early years, her career success and, of course, fashion.

On her current success: “I’m the luckiest broad in Hollywood now. To be the lead actor on ‘Scandal’ and to be in the highest-earning Tarantino movie – I don’t get to ask for more.”

On getting red-carpet ready: “I found out I enjoy the process. All these people show up at my house, they all have kits, someone has dresses. And it’s like, let’s have fun. It’s not all about me. We’re able to create stories on the red carpet.”

On the career Washington thought she’d pursue: “I imagined I’d be a clinical psychologist, with a focus on how performance shapes identity. I’d figure out ways to use role-playing in the healing of people.”

When asked if as a girl she thought she’d ever consider modelling or becoming a film actress: “I was not that girl. I was a kooky theater kid, silly and goofy and academic.”

Posted by Catherine Kallon on June 1, 2013 In: Kerry Washington