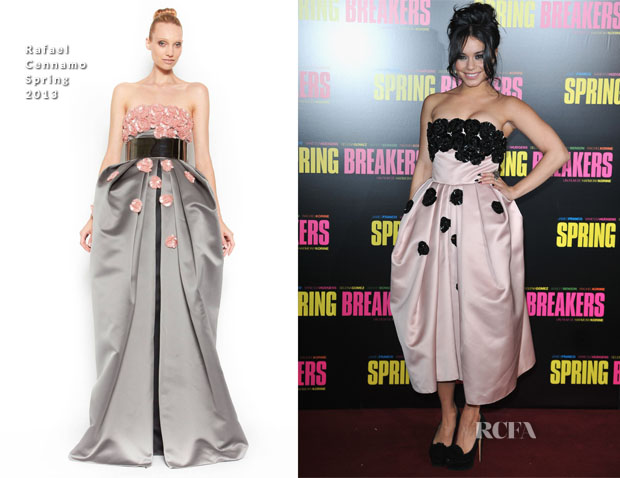 Vanessa Hudgens put on her party best for the ‘Spring Breakers’ Paris premiere at Le Grand Rex on Monday.

She took to the red carpet dressed in a Rafael Cennamo dress from the Spring 2013 collection.

The strapless creation was a riff on the lookbook version, cutting the floor-sweeping length to an above-the-ankle hem and inverting the soft colour palette to a harsher, less sophisticated contrast of black and ballet pink.

The effect caused the rosette embellishment to appear more like dark spots than dainty petals.

I also missed the edge of the metallic belt, but that would have overwhelmed the pretty and petite Vanessa even more.

An elaborate updo, dagger-shaped black-lacquered nails, and heavy black, rosette-topped pumps were the over-the-top finishes to this look.

Yes, girls just wanna have fun. But, here, the fun seemed too twee and appeared more suited to a prom princess than a red-carpet starlet.