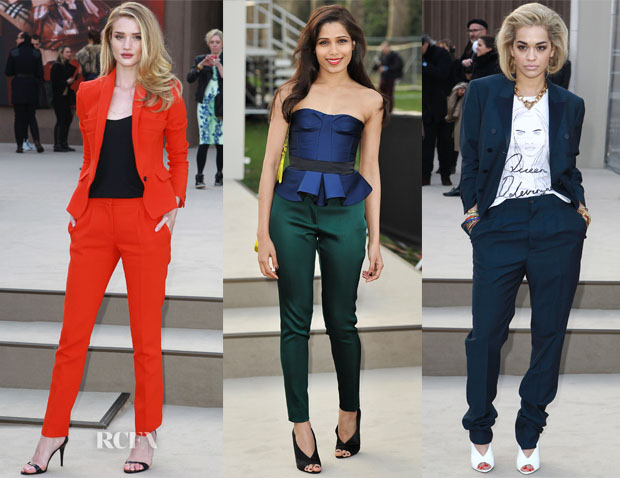 As is customary, quite the coterie of starlets stylishly resided on Burberry Prorsum’s front row to see just what Christopher Bailey had in store for Fall 2013; a collection he titled “Trench Kisses, A Collection of Classics and Christine Keeler.” While it was hard to compete with the designer’s gorgeous runway heroines, many of these cool-girl guests rocked their Burberry best at London’s Kensington Gardens on Monday afternoon and gave the models a good run.

Rosie Huntington-Whiteley: The British model and actress broke out a sleek coral-red pantsuit for her front-row seat at the show. Was it mannish? Yes. But with the slim fit and the impeccable tailoring, no to mention Rosie’s voluminous waves, she looked like she just stepped off the runway herself.

Freida Pinto: Opting for a cooler palette of jewel tones, the actress wore a dark sapphire corset and emerald green trouser from Burberry Prorsum’s colour-saturated Spring 2013 collection. Instead of the cropped biker jacket originally featured on the catwalk, Freida added a black sash detail to the peplum waist of the top. Without any accessories on this look, I would have at least liked to see the added zest of the runway’s golden yellow shoe. But she played off the black with her peep-toe wedge.

Rita Ora: We can always count on this British songstress to pump up the volume with her chameleon-like style. Here, she also went for a menswear-inspired statement with a navy suit that kept an edge with its ’80s slouch and rolled-up sleeves, paired back to stacks of colourful bangles, a “foxy” chain necklace and a T-shirt that playfully illustrated Rita’s new British BFF and model of the moment, “Queen” Cara Delevingne. The white version of those peep-toe wedges also made an appearance, as did a modernized bouffant-style ‘do. 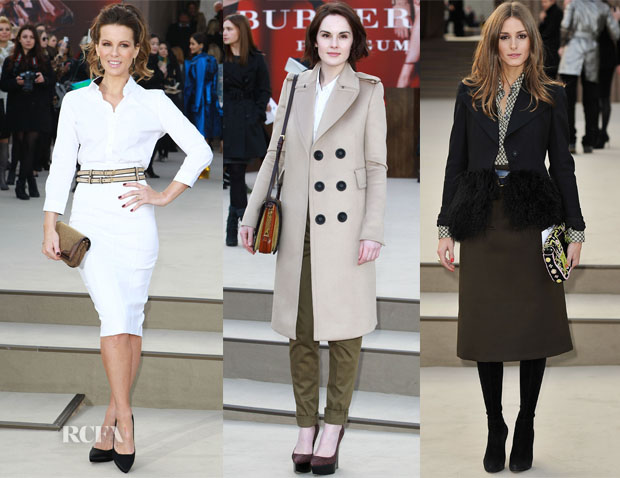 Kate Beckinsale: The British actress brought her 12-year-old daughter, Lily Mo, with her to the show, where this star super-mom was chic for days. She went for high-polish with her crisp white button-down shirt and high-waisted skirt that closely skimmed her slim curves. A double belt and matching camel clutch added visual interest, while a high ponytail playfully topped off this look.

Michelle Dockery: This ‘Downton Abbey’ girl—and her cropped bob—fit right in to the trench-heavy Burberry Fall 2013 collection, wearing a coat from the Pre-Fall 2013 offering. Featuring oversize snap enclosures and a warm shade of greige, it was a fresh twist on the traditional outerwear piece.

Olivia Palermo: This stylista took a completely different fashion direction from her earlier Topshop showing. Going for a more traditional route, she buttoned up in a patterned blouse paired with a dark olive below-the-knee skirt and skinny boots. But her navy blazer still packed a dose of fun with its fuzzy, feathered detail at the bottom. 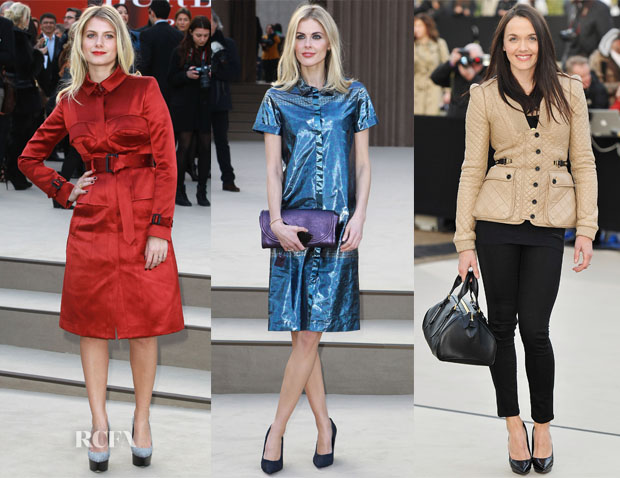 Melanie Laurent: Also going the way of the trench, the French actress wore a ruby red coat from Burberry’s Spring 2013 collection—and a red lippie to match. Unfortunately, the piece photographed as a bit rumpled. I much preferred the runway outing with its vividly delightful hue and a bodice that translated as more structured and architectural. I also liked the model’s blue pointy-toe shoe, as opposed to this blocky platform.

Donna Air: The British star also took the designer’s Spring 2013 collection for a spin with this shiny, explosively hued shirtdress. Good in theory, but when mixed up with an oversized purple clutch and a totally uninspiring and clunky pair of navy pumps, this look fell flat—despite its reflective properties.

Victoria Pendleton: Sporty and chic, said this British Olympian’s look of the day. The blazer-coat was the main attraction with its buttons, buckles and big side pockets. But the bag felt a bit oversized and better for a seat on an airplane, rather than a fashion show. Was this look worthy of the medal stand for you?

Who Was Your Best Dressed At The 2013 Goya Cinema Awards?