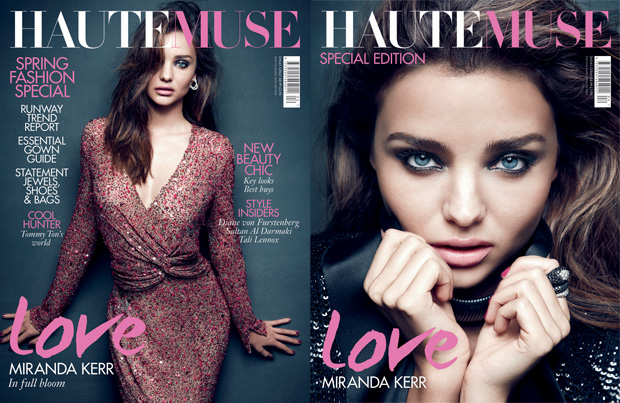 Miranda Kerr graces two covers of the latest HauteMuse magazine wearing a Jenny Packham embellished dress on one and a sequined Pamella Roland jacket on the other, which were both shot by Nino Muñoz.

In her interview, the Australian Victoria’s Secret Angel talks about motherhood, how she snapped back into shape after having her baby Flynn a year ago, her marriage to Hollywood actor Orlando Bloom and how she won’t model forever.

Here are some extracts from her interview:

On motherhood: “It’s the best thing that I’ve ever done. He is my pride and joy and he’s the most important thing. It’s really wonderful.”

On regaining her figure so quickly after giving birth: “It’s been a lot of yoga and Pilates, and eating healthily. It does take hard work.”

On falling in love with Orlando Bloom: “We were friends for at least six months first after we met, so it was a very nice way to start. Romance followed friendship.”

On modelling: “It could all stop tomorrow with modelling; it really wouldn’t faze me. It’s not going to be around forever and that’s okay because I have so many other things that I want to do in my life.”

Posted by Catherine Kallon on March 9, 2012 In: Miranda Kerr

13 Responses to Miranda Kerr for HauteMuse