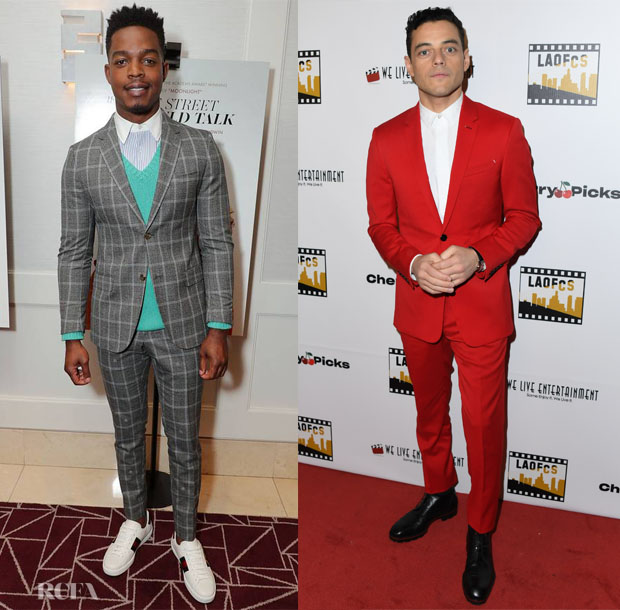 An overwhelming majority felt that it was the men who excelled and outshone the ladies at the Golden Globe Awards, and two of the attendees were back on the red carpet to prove their impeccable style isn’t confined to awards season.

Stephan James: I feel this is going to be a great year for the young actor, who stars in ‘Homecoming’ and the upcoming ’17 Bridges’, but it was ‘If Beale Street Could Talk’ he was promoting  alongside Kiki Layne and Tracee Ellis Ross at the screening on Tuesday (January 8) in West Hollywood, California. Wearing black was a rare occurrence for Stephan at the Globes, so I’m delighted he was back to showcasing his love for colour, print and flair wearing a Gucci Cruise 2019 grey and blue plaid Monaco suit, with a turquoise, stripe shirt and Gucci’s ‘Ace’ sneakers with ‘Loved’ appliqued down the side, which apt, as I love his dapper style.

Rami Malek: Much like Stephan, Rami isn’t one to stick to the black or navy dress code on the red carpet. Who can forget is bold blue Dior Men suit from last year? On this occasion red was his colour of choice courtesy of Berluti. Red is such a hard colour to wear as a suit. Especially when it comes to styling. Timothée Chalamet styled his with white sneakers. In this case, I can’t say the black shoes are the perfect option considering the stark contrast, but he rocks the look nonetheless.