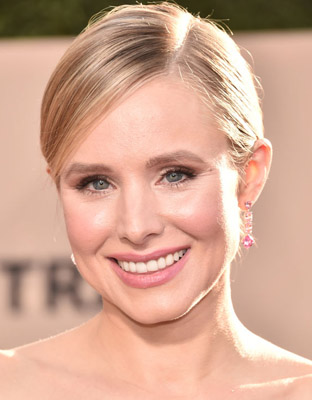 Chosen as the inaugural host for 2018 SAG Awards, Kristen Bell was certainly the belle of this ball at this year’s awards ceremony.

While the bubbly actress chose a stunning pink J.Mendel gown for the red carpet, she sporting a trio of beautifully designed black dresses throughout the ceremony. To complement her collection of ensembles during the evening, Celebrity Makeup Artist Simone Almekias-Siegl created a beauty look that was bold and injected a bit of elegant color throughout.

In discussion with both Nicole Chavez (fashion stylist) and Jenny Cho (hairstylist), Simone chose a look that harmonized with Kristen’s full look. Focusing on skincare, a personal passion for Simone, she created a flawless and ultra-moisturized foundation before creating her plum-toned beauty look. Using Neutrogena’s versatile collection, here’s how she achieved this look:

SKIN: Prepping skin was crucial for this look. Starting with cleansing the skin with Neutrogena Makeup Remover Cleansing Towelettes, Simone followed with an intensely hydrating and skin smoothing Neutrogena HydroBoost HydroGel Face Sheet Mask. A favorite for her, Simone details the many benefits of this mask. “It plumps the skin and smoothens out fine lines under your eyes,” says Simone. To further moisturize both the skin and under eye area which also acted as a primer, Simone massaged Neutrogena Hydro Water Gel and Eye Cream into Kristen’s skin.

LIPS: Prior to color, Simone primed Kristen’s lips with Neutrogena Hydro Boost Lip Treatment for a nourishing base. She followed up with Hydro Boost Hydrating Lip Treatment in True Nude for a delicate nude color.

New To Beauty at NET-A-PORTER Internatio...

Get The Look: Maisie Williams’ Urb...

100+ Off Duty Ideas from NET-A-PORTER

One Response to Get The Look: Kristen Bell’s SAG Awards Plum-Toned Smokey Beauty