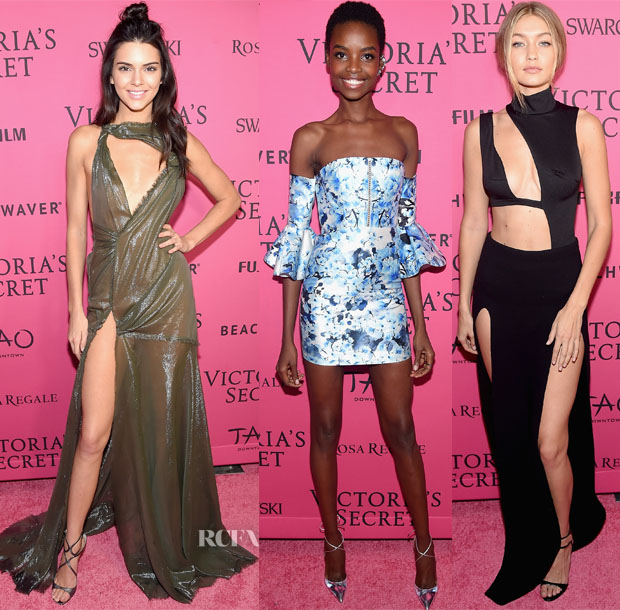 Following their strenuous two-show shift, the models of the 2015 Victoria’s Secret Fashion Show headed to TAO Downtown for the after-party on Tuesday (November 10) in New York City.

Kendall Jenner: It’s rare to see Kendall smiling, but she had a lot to be happy about as this was her first show for the lingerie brand. The model swept the runway wearing a sheer Versace green gown with cut-out details and a thigh-high slit; naturally, which didn’t follow the black or white dress code worn by most of the models. The look was styled with Jimmy Choo ‘Lance’ sandals.

Maria Borges: The beautiful model was also in great spirits wearing a floral print Gabriela Cadena Spring 2016 strapless dress with ruffle sleeves. A dress as short as this could’ve come off as tacky, but the print keeps the look fresh and vibrant, plus who wouldn’t be charmed by that gorgeous smile?

Gigi Hadid: While her cut-out look appears to be a dress, it’s actually comprised of a House of CB ‘Malla’ bodysuit and Sally LaPointe Fall 2015 double slit skirt. She is showing a lot of skin, but for a VS after party look some would consider this tame. Tamara Mellon ‘Glow’ patent sandals provided the finishing touch. 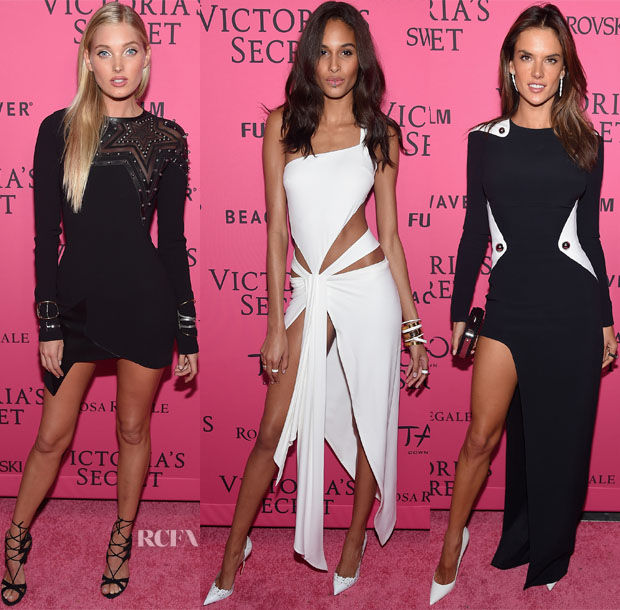 Elsa Hosk: Proving that you don’t need to be nearly naked to look amazing on this red carpet, the model wore an Anthony Vaccarello leather and tulle stars black mini from the Fall 2015 collection styled with Aquazzura ‘Belgravia’ sandals.

Cindy Bruna: Preferring to go the nearly naked route, I can get on board with the slashed-in-all-places Alexandre Vauthier Fall 2015 Couture gown for this event, but the lip ring is a turn off.

Alessandra Ambrosio: The Brazlian model must have been looking at Cindy saying “I’ve already worn that gown“, which won’t surprised anyone. Alessandra was quite tame by her standards wearing a Mugler bi-colour gown from the Resort 2016 collection featuring just on the one slit. 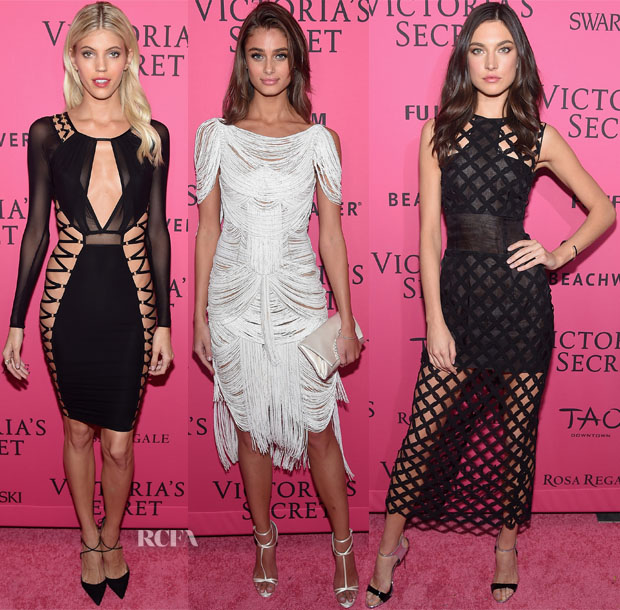 Devon Windsor: After spending the whole day in underwear, Devon was done; opting to attend the party wearing a Bao Tranchi ‘Allure Bodycage’ dress which would allow her to go commando.

Taylor Hill: Going the flapper route, the model showed much more creative flare than some of her counterparts by donning this white draped bugle bead dress by Marchesa. 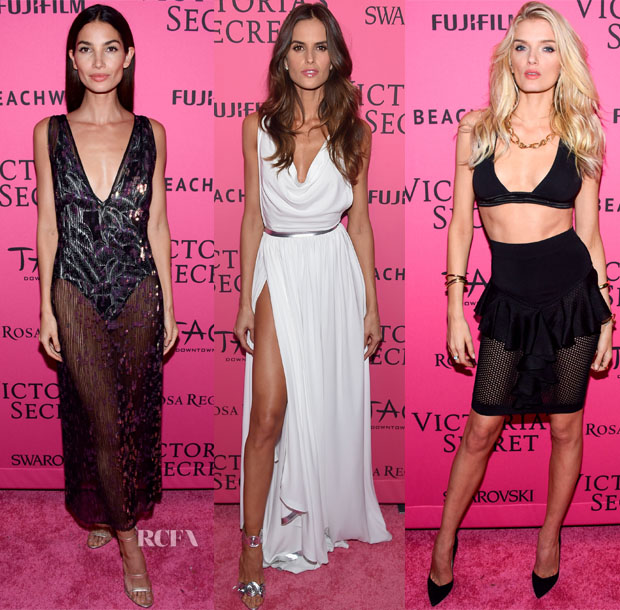 Lily Donaldson: I can’t find one thing I like about this look from the British model. In truth, I find this really disappointing. 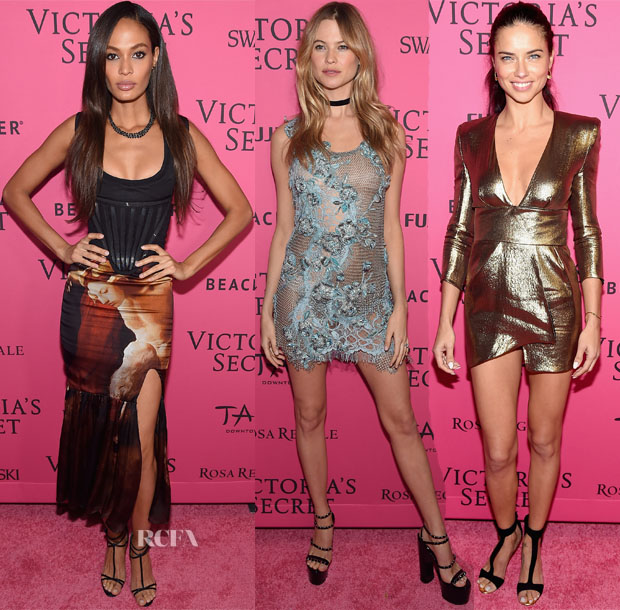 Joan Smalls: The model served up no surprised in Givenchy.

Adriana Lima: We don’t see Adriana on the red carpet much, so this night is her time to shine. Unfortunately I was underwhelmed by her Alexandre Vauthier Spring 2016 gold mini dress and the styling. 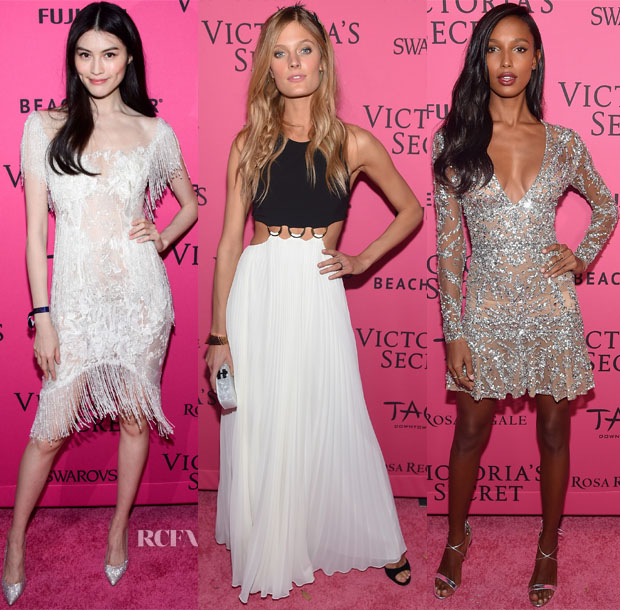 Sui He: On paper this ice-white fringed dress should’ve been a totally wash out for Sui He, but by some miracle she totally makes it work.

Jasmine Tookes: Someone should’ve let Jasmine know that she opted for the wrong colour underwear for her Zuhair Murad Fall 2015 mini sparkler. 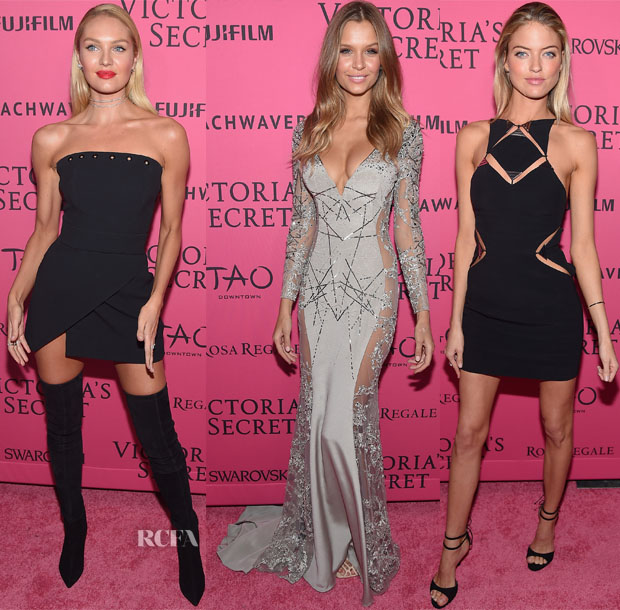 Candice Swanepoel: Showcasing her gorgeous figure in an ultra mini LBD, it’s really her Brian Atwood ‘ Odille’ boots I am lusting over.

Josephine Skriver: The model was one of the few not to wear a black dress, which worked in her favour as she stood out in this silvery-grey Gabriela Cadena Fall 2015 gown. You may remember that Eva Longoria wore this same gown during Cannes Film Festival.

Martha Hunt: The model wore a commercial version of the Mugler dress we’ve seen on both Selena Gomez and Naomie Harris. The look was styled with Tabitha Simmons ‘Viva’ sandals.