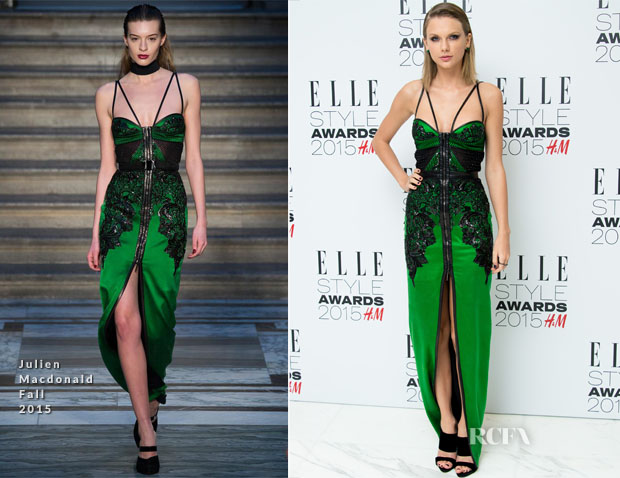 Taylor Swift, who will be performing at tonight’s Brit Awards, attended the 2015 Elle Style Awards on Tuesday (February 24) in London, England, where she was named ‘Woman of the Year’.

From the title I’m sure you were expecting Taylor to be wearing a bedazzling sheer number – a typical Julien Macdonald dress – however, she wore a bright green dress with boudoir inspirations from the designer’s Fall 2015 collection.

Visually striking, I love how this dress evokes a cool and contemporary edge that Taylor matches with slicked-back hair and smouldering eye makeup.

The only thing I would swap out of this look are the heavy strapped Giuseppe Zanotti mules for thin-strapped sandals to mimic the dress’s straps, such as Jimmy Choo ‘Minnie’ sandals or Stuart Weitzman ‘Nudists’.