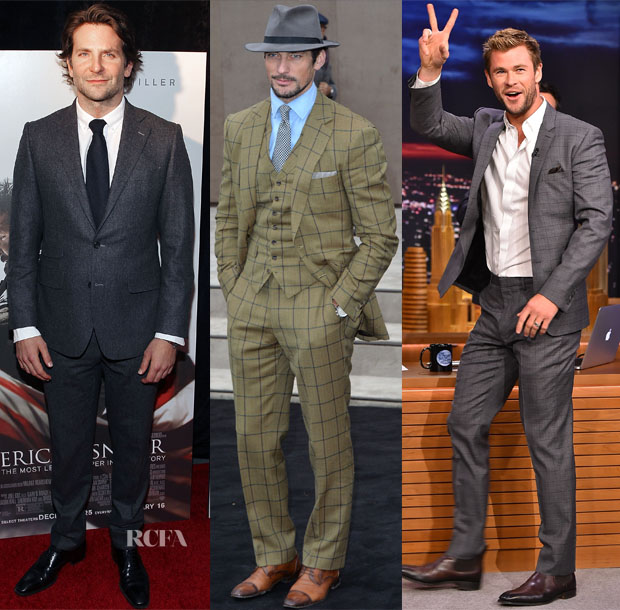 Here is a quick menswear roundup starting in Washington, crossing to London and heading back stateside to New York.

Bradley Cooper: While his co-star Sienna Miller was promoting their new movie ‘American Sniper’ in New York, Bradley was attending the premiere held at the Burke Theater at the US Navy Memorial in Washington DC on Tuesday (January 13). The actor was looking very sharp in a Thom Sweeney grey flannel suit styled with a thick navy tie and shiny patent-leather lace-ups.

David Gandy: The words David Gandy and dapper go hand in hand. He was looking mighty fine in London on Monday afternoon (January 12) ahead of the Burberry Prorsum London Collections: Men Fall 2015 show. Decked out in a mustard three-piece windowpane suit styled with blue shirt and striped tie, I was very much on the fence when it came to the hat, but the styling grew on me quite quickly because, let’s face it, he can pull just about anything off.

Chris Hemsworth: The actor made a guest appearance on ‘The Tonight Show Starring Jimmy Fallon’, taped at the Rockefeller Center on Tuesday (January 13) in New York City, to promote his latest movie, ‘Blackhat’. Before being soaked with water by the host, the actor was looking as handsome as ever wearing a grey windowpane suit sans tie, which was beautifully tailored for a streamlined fit.