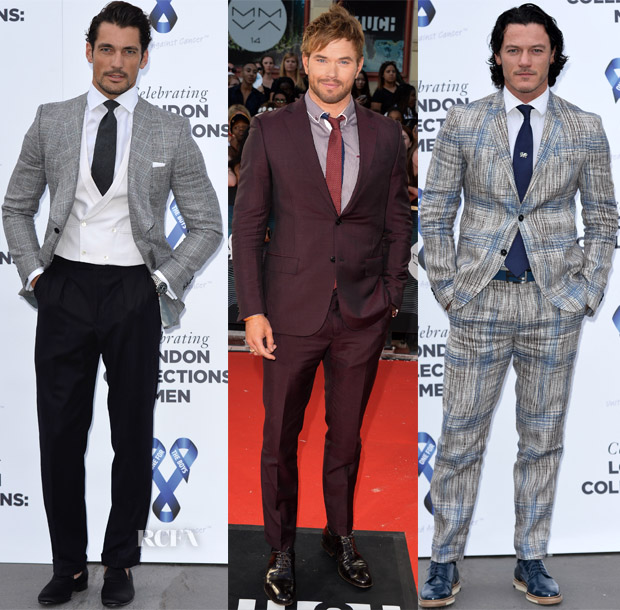 Over the weekend, a handful of men were out and about in a range of eclectic and colourful ensembles. The traditional suit was completely missing in action among this group of guys, who were none too afraid to push the envelope beyond basic black.

David Gandy: The model was ever so dapper in his Marks & Spencer Best Of British Collection ensemble when he attended the One For The Boys Charity Ball during the London Collections: Men. With that steely stare, this handsome hot topic can pull off this hyper-tailored, three-piece suit including a plaid sport coat, white vest and dark pleated pants.

Kellan Lutz: At the 2014 MuchMusic Awards in Toronto, Canada, the actor hit the red carpet in a burgundy Ermenegildo Zegna two-button, notch lapel suit. His maroon tie may have been a bit askance, but it’s hard to argue with this eggplant-hued statement.

Luke Evans: Making quite the impression, Luke may have even out-dressed David at the One For the Boys Charity Ball. His Fendi Spring 2014 statement featured a chaotic pattern of blue and charcoal lines, which he complemented with a navy tie and patent blue, rubber-soled loafers. Too loud? 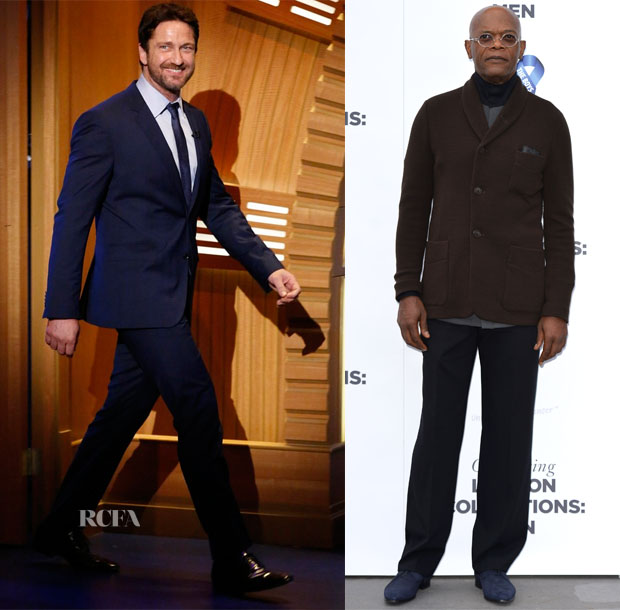 Gerard Butler: The actor flashed a smile and an incredible blueberry-hued suit by BOSS for his appearance on ‘Late Night with Seth Meyers’. The two-button, notch-lapel jacket was worn with a white button-down shirt, navy satin tie and auburn calf shoes. This is a great colour for Gerard, especially given his own baby blues.

Samuel Jackson: Also at the One For the Boys Charity Ball, the actor covered up in a more fall-inspired chocolate-brown coat with pockets, worn over loose dark pants and with blue shoes for a very unseasonal look from Giorgio Armani. 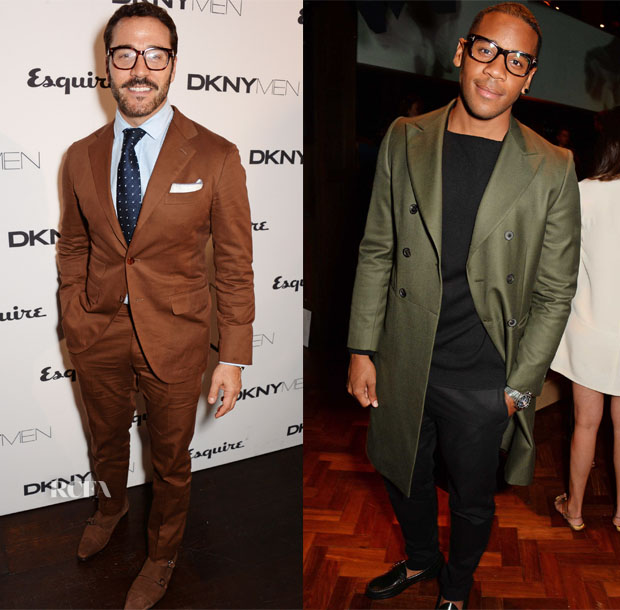 Jeremy Piven: Before joining the mix at the One For the Boys Charity Ball, the ‘Entourage’ star was at the Esquire & DKNY MEN official opening night party for the London Collections: Men. Dressing to impress, he wore a cayenne-coloured suit with a navy printed tie and tonal brown shoes. The glasses were his cool accessory, but even they couldn’t cover up those wrinkles in the suit.

Reggie Yates: Working a DKYY Men forest-green overcoat, the British star kept the rest of his look simple with a black shirt, pants and socks-less loafers at the Esquire & DKNY MEN official opening night party for the London Collections: Men. The vibe was effortlessly casual yet cool.