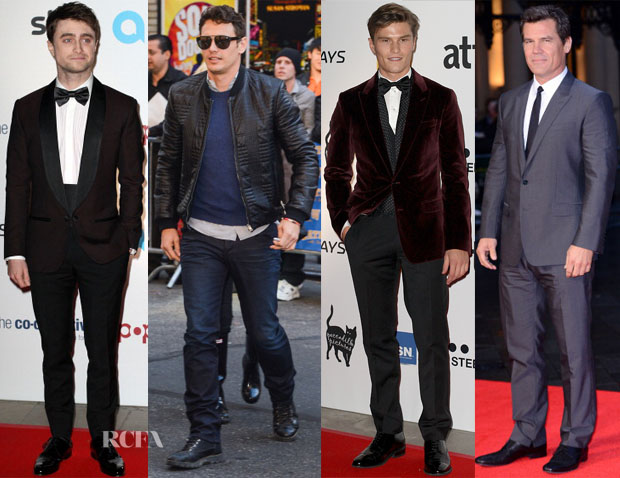 Here is a quick roundup of some of the fellas who took to the red carpet yesterday evening.

Daniel Radcliffe: The actor took home the Best Actor award at the Attitude Awards in recognition of his performance in ‘Kill Your Darlings’, looking very sharp and smart – as always – wearing a classic Dolce & Gabbana shawl-collar maroon and black tux with a pleated white shirt and bow tie.

James Franco: The actor wore a laidback Gucci Pre-Fall 2013 look featuring a black quilted leather jacket with a blue wool crewneck sweater, a grey dress shirt, blue denim jeans and black leather boots while making a guest appearance on ‘The Today Show’ and for his arrival at the Ed Sullivan Theatre for the ‘Late Show with David Letterman’. This might be the first time I have ever seen James not wearing a suit.

Oliver Cheshire: Channelling his inner Hugh Hefner, the model wore a Dolce & Gabbana suit featuring a rich-burgundy velvet jacket, a polka-dotted scarf and a smart bow tie. The model fared much better in the style stakes than his girlfriend Pixie Lott. I’m still trying to figure out what is going on there.

Josh Brolin: Menswear is having a Dolce & Gabbana appreciation moment at present; Josh also wore a Dolce & Gabbana suit to the ‘Labor Day’ London Film Festival premiere alongside a radiant Kate Winslet on Monday night. Instead of classic black, he went for a sleek grey suit with a modern sheen styled with a white dress shirt and dark-grey tie to complete his impossibly handsome look.