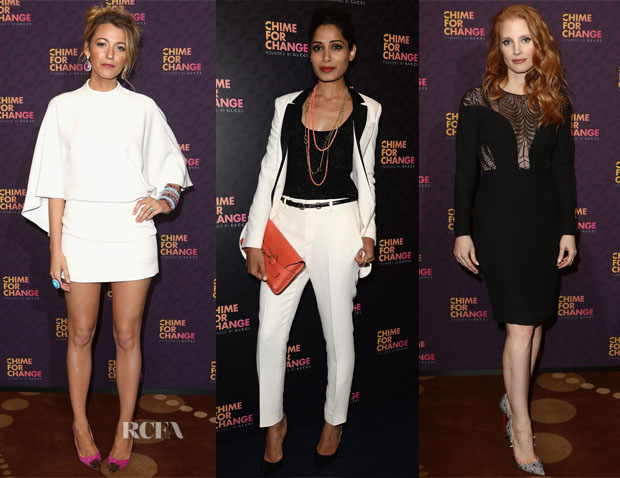 Gucci’s new global campaign saw some of the world’s most celebrated artists come together today at London’s Twickenham stadium for the ‘Chime For Change: The Sound Of Change Live’ concert event which is aimed to raise funds and awareness for girls’ and women’s issues globally.

The royal box and media room saw many of Gucci’s brand ambassadors from around the world together to support this worthy cause.

Blake Lively: With an arm stacked full of Lorraine Schwartz colourful bracelets and hot-pink Christian Louboutin pumps with a gold toe-cap, Mrs Reynolds opted to wear a stark white mini Gucci frock with a cape. Her hairstyle is the one thing preventing me from loving this look from head-to-toe.

Freida Pinto: With a touch of Saturday Night Fever; the Indian actress opted for a tailored white Gucci suit with black lapels styled with Gucci accessories including a bright-bit coral clutch.

Jessica Chastain: The actress, who was co-presenting with James Franco, wore a black Gucci Fall 2013 frock with a lace yoke, which was shorter than the same look that took to the runway. Adding an edge to her frock, she wore spiked Christian Louboutin ‘Pigalle’ pumps. 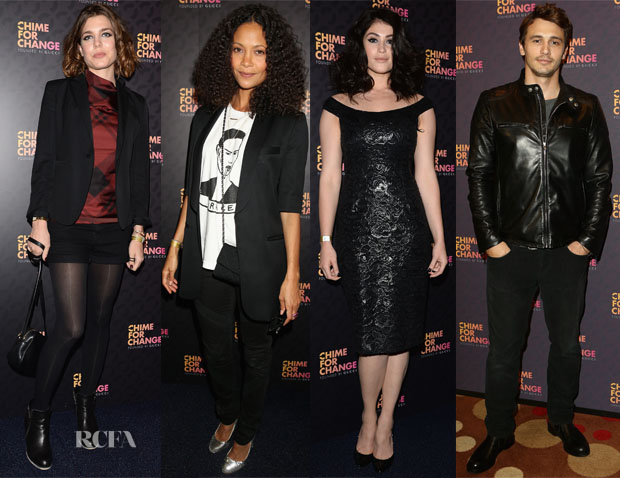 Gemma Arterton: Most of the guests opted for a fairly laid back look; however, Gemma went glam wearing a black jacquard off-the-shoulder Gucci Pre-Fall 2013 dress with blown-out wavy locks and kohl-rimmed eyes.

Zoe Saldana In Gucci – ‘Chime For Change: The Sound Of Change Live’ Concert