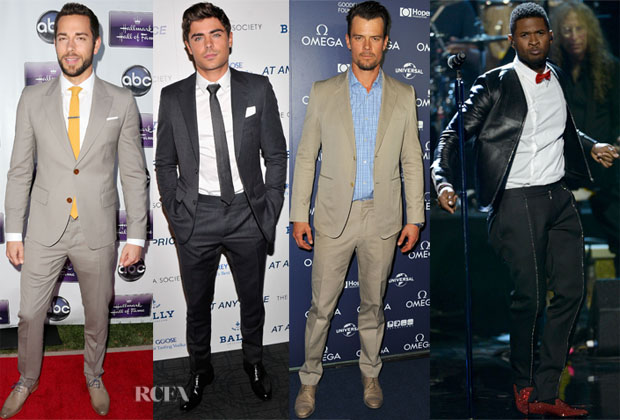 Here is a roundup of some of the menswear which has taken to the red carpet this week.

Zachary Levi: The actor joined his co-star Alexis Bledel on the red carpet for the ‘Remember Sunday’ Disney premiere looking very smart in a grey Vivienne Westwood Man Spring 2013 suit. Usually there is some kind of quirk that comes with a Westwood suit, but this is a surprisingly strait-laced look so I appreciate Zachary’s decision to add a bright-yellow tie. Where most dudes would’ve added black shoes to a light-grey suit – see Chris Pine – Zac opted for a taupe pair with blue laces. Definitely a front runner in the best-dressed department.

Zac Efron: The actor joined co-star Heather Graham on the red carpet for the New York screening of ‘Any Price’ last night wearing a classic charcoal suit by Balenciaga. His two-button notched-lapel suit was styled with a striped tie, white pocket square and Bally ‘Gosbel’ shoes.

Josh Duhamel: Opting for a casual red carpet look, Josh attended the US launch of ‘Planet Ocean’ presented by Omega watches last night. With spring in the air, he also joined the current trend of wearing a light-coloured suit. Keeping things interesting, he styled his sand suit with a blue-and-white shirt. Sporting the Omega Seamaster Planet Ocean GoodPlanet timepiece, the actor also opted for taupe-coloured shoes.

Usher: The singer took to the stage to perform at the 2013 Rock and Roll Hall of Fame Induction in LA on Thursday evening. Usher’s contemporary twist on a classic menswear look saw him don a simple white shirt accented with a red bow tie which matched his crystal-accented red loafers. Adding yet more sparkle to his performance look, his black pants featured diamante detailing, with a cool Balenciaga leather jacket rounding things off.

5 Responses to Menswear Red Carpet Round Up