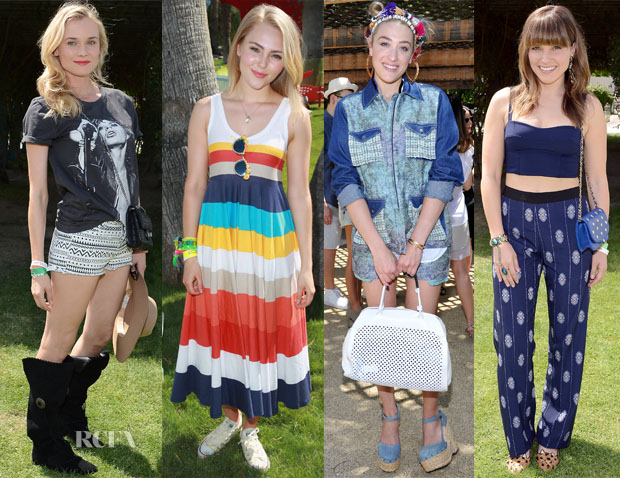 The first weekend of Coachella in California was a smash-hit—and a lesson in free-spirited fashion that plays by no rules. PYTs dotted the sun-drenched indie music scene, as they made the party rounds, proving that while music may be the star attraction, style obviously occupies the main stage, too.

AnnaSophia Robb: I nearly didn’t recognize the teen incarnation of Carrie Bradshaw, as she left her ‘Carrie Diaries’ character’s SATC fashion sense (and the Manolos) back in New York City. Instead, AnnaSophia wore a beach-y, striped Lacoste dress and a pair of sneakers for the LACOSTE L!VE 4th Annual Desert Pool Party in Thermal, California.

DJ Mia Moretti: This club kid was looking appropriately hipster-ish at the Harper’s BAZAAR Coachella poolside fete at the Parker Palm Springs in Palm Springs, California. The deejay rocked a denim and lace button-down, a pair of cutoffs and matching platform shoes. Large wooden hoop earrings and a complicated crochet hair band, which I’m still trying to figure out, topped off the look. Odd as it may seem, even Dior had a role in this patchwork outfit, as Mia carried a sleek perforated bag from the label.

Sophia Bush: At the H&M Loves Music Coachella 2013 kickoff event at the Merv Griffin Estate in La Quinta, California, the actress was feeling blue, as she coupled together some of the season’s boldest trends—from her navy midriff-baring top to her printed pajama pants and her leopard-print kitten bedroom slippers by Charlotte Olympia. Statement earrings, an embellished chunk of wrist candy and a blue purse sprinkled with gold hearts finished off this schizophrenic look. 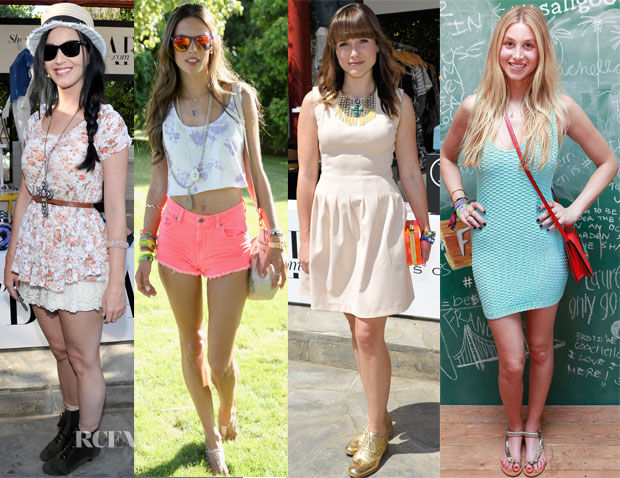 Katy Perry: Before attending the LACOSTE L!ve party, the ‘California Gurls’ singer headed to the Harper’s BAZAAR Coachella poolside fete at the Parker Palm Springs in Palm Springs, California. From the ankles up, I don’t mind her hippie-dippy moment, with her belted rosebud-printed top and loose white mini, finished with a hat and side braid. Those dingy black ankle boots are the thorn in this flower-child look.

Alessandra Ambrosio: A Victoria’s Secret model can make a paper sack—or a shrunken tie-dye Lacoste top and Pepto Bismol-pink high-waisted cutoffs—look good. Alessandra made Coachella her personal runway at the LACOSTE L!VE 4th Annual Desert Pool Party in Thermal, California. Accessorizing with long chain necklaces, an armful of wristbands and candy-coloured shades, she was the ‘it’ girl here.

Sophia Bush: The day before her blue period at the H&M event, Sophia took a more subtle approach to her wardrobe at the Harper’s BAZAAR Coachella poolside fete at the Parker Palm Springs in Palm Springs, California. Her conservative H&M cocktail frock seemed out of place at the indie fest, so I’m glad she added some funky flavour with a gemstone necklace and bangles, along with a neon-orange clutch and shiny gold brogues. The actress has been disappointing us lately with her lacklustre entrances. Do you think she’s partially redeemed herself at Coachella?

Whitney Port: Looking like a university student on spring break, the reality star-cum-designer wore a skintight aqua dress and silver flats to the Fruttare Hangout at Coachella in Indio, California. Darkly lacquered nails and a crimson cross-body bag were an unwelcome distraction.

24 Responses to Coachella 2013 Events Round Up