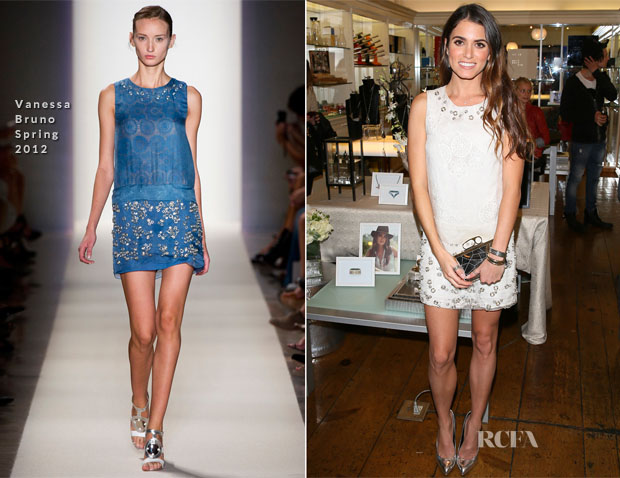 Not only did the delicately hammered silver and gold gems in the starlet’s capsule collection ($28-$97.50) catch our eye, so did the trinkets that adorned her little white dress, especially the ones all around her skirt—how does it feel to sit in the number with all of that back there? “It’s interesting on the butt,” the actress graciously explained. “It doesn’t hurt. The whole car ride here, I just kept thinking, What am I sitting on?”

Read on to learn more about the brunette’s new jewelry line, which is a collaboration with Pascal Mouawad (the same man who partnered with Nicole Richie for House of Harlow 1960), her favorite red carpet moment ever and what she’s planning to wear to the upcoming premieres for the final installment in the Twilight film series.

On her passion for designing jewelry: There are so many creative people in my family. Everyone is an artist to one extent or another. My grandmother, whom my line is named after, was a jewelry designer. She makes ceramic tile murals. My brother is a photographer. My dad was an architect and is now a set designer. There was just art everywhere, and I grew up making jewelry. My mother and I made jewelry together. That was actually my first way of making money as a kid. That was my first job when I was in the third grade. Not to make it a sob story, but I just grew up really poor. I worked at the cafeteria and got free lunches. Then, I made bracelets at home and sold them for $3. That was my first source of income.

On how involved she was in the process: This has been a long time coming for me. I didn’t want anyone to design a line and hand it to me with my name on it. That’s actually easier to do nowadays instead of going in and asking to do it myself. I really fought for this. I brought all of my sketches to the meeting. I showed them every theme I wanted to explore and they helped me narrow it down. This line came from me and my family.

On the inspiration behind her pieces: There are a few different themes. There’s definitely some animal inspiration in there. The honeycomb earrings were inspired by bees. I love bee farming. I don’t think that people really know about the role bees play in our environment. There’s the fish ring as well as the earrings and the necklace. I really love those pieces. My grandmother did an underwater collection with her ceramic tiles. One of her pieces was a three-piece fish set, and it’s the only piece of art that I’ve owned from my grandmother. I love it! So, that’s where that came from. Every piece has a story. With the top rings, I remember growing up, my mom wore them on her fingers and she’d tap them on the steering wheel like she was playing the drums. I always said as a kid that if I ever designed a jewelry line, I would make a top-of-the-finger ring.

On her style “aha” moment: It’s actually really recent. I quit smoking three years and started exercising. I really turned my entire life around. I decided at that point in time that I was going to really focus on feeling good. I think it really shows in the choices I make with clothing. In the last two or three years, I’ve really started to explore the fashion world.

On what’s inspiring her style right now: I’m pulling inspiration from all different places. I love looking at women who feel comfortable with who they are, like Kat Dennings, Christina Hendricks and Gwen Stefani. That’s all over the place, but just women who can wear whatever they wear and they own it. Music is also really inspiring my style. I feel like I’m dressing a little more Nashville– like a musician.

On her favorite dress she’s worn on the red carpet: It has to be the Michael Kors dress with the cutouts that I wore to the New York premiere of Breaking Dawn – Part 1 last year. I love that dress! It was the first moment, for me, where I felt like, Wow! I’m comfortable in this! It was very risqué for me, but I just decided to go for it and feel good about it. I feel like you could see that, too.

On her plan for upcoming Twilight premieres: I’m really focusing on wearing cool designers right now. I have three premieres coming up for Twilight. You can expect me to wear designers that I’ve never worn before and stuff that, for me, is a little more edgy and tighter in areas where I normally wouldn’t do that. Just things that I never thought I’d feel comfortable in, but I’m just going to go for it and make bold fashion choices.

Rihanna In Proenza Schouler – Out In New York City