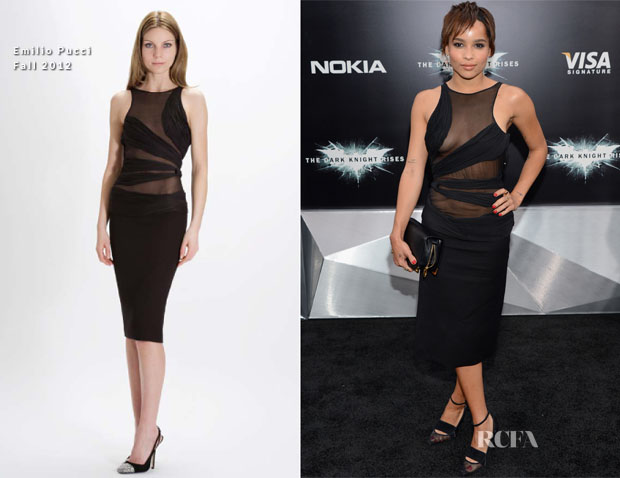 Whenever Zoe Kravitz wears for a red carpet appearance, I instantly devote my full attention to this established fashionite, which is exactly what I did when pictures appeared of her at the AMC Lincoln Square Theater in New York for the premiere of ‘The Dark Knight Rises.’

Unforunately, the trusty Kravitz failed to hit a home run this time around.

While the top of the dress certainly leaves nothing to the imagination, the below-the-knee hemline is modest and contradicts the risquée design above it.

I can usually forgive many a fashion mistake if there is a good shoe involved. Unfortunately, her see-through Alexander Wang ‘Sabine’ pumps does not a best dressed nominee make. A towering heel could have compensated for the longer length of the dress — in fact, if there was ever a time for a monster-sized Christian Louboutin heel, this was it

Kravitz’s red nails and black clutch, on the other hand, were perfect accessories for this look, and complemented her cropped, choppy haircut.

Do you think Kravitz’s look was a miss? Or are you putting her on your best dressed list?

Naomi Scott Is A Pucci Princess For R...

Quirky Katy Perry Comes Out To Play For ...