Finally. The moment we’ve all been waiting for. The start of the ‘Ocean’s 8’ promo tour.

Sarah Paulson, Mindy Kaling, Sandra Bullock, Cate Blanchett, Anne Hathaway and Awkwafina took to the red carpet for ‘The Big Picture’ CinemaCon presentation of ‘Ocean’s 8’ on Tuesday (April 24) in Las Vegas, Nevada, all bringing their own touch of sparkle to the event.

Sarah Paulson: The actress shimmered in a gilded Alberta Ferretti Fall 2018 dress -sans the runway boots- which was both sophisticated and chic. Sarah tends to prefer moody hues, so I was delighted by this bright offering.

Sandra Bullock: Sandra can tend to stick to LBDs, so I was thankful that opted for a Johanna Ortiz Wasai kimono and leather trousers from the Spring 2018 collection. The Colombian designer tends to champion her native country, however, it seems this look was influenced by Japanese culture on this occasion. Alexis Bitter jewels completed her look.

Cate Blanchett: I know some of you have very strong feeling about Gucci, but I love how chic this retro inspired Pre-Fall 2018 cream jacquard suit with black velvet contrast detailing is. The look was further amped up with an opulent gold necklace.

Anne Hathaway: It’s so good to see Anne Hathaway back on the red carpet. She returns wearing a Bottega Veneta Spring 2018 dress with colourful stud embellishments that lends attention-to-detail and modern attitude to her look.

Awkwafina: She may not be as recognisable as her cast mates, but the actress held her own rocking a Topshop striped blazer and matching striped trousers, styled with Nicholas Kirkwood sandals. 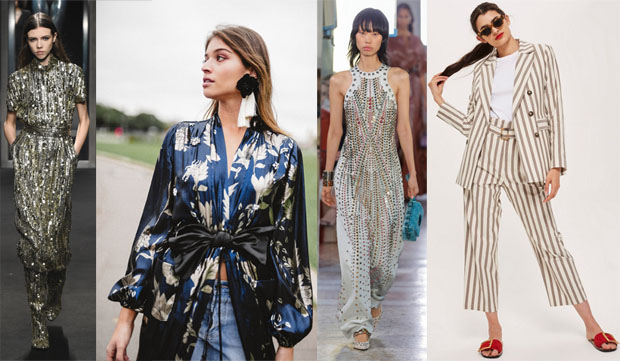 Sandra Bullock in Johanna Ortiz and Cate Blanchett in Gucci