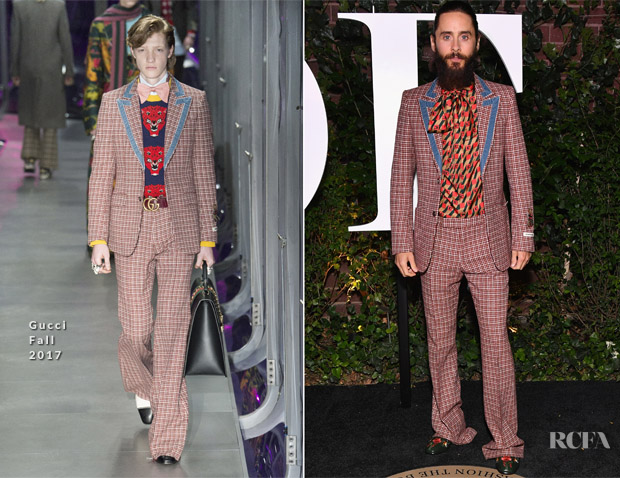 Another day, another over-the-top pattern (or five) for Jared Leto, as he brought his zany sartorial show to the BoF 500 Gala on Saturday (September 9) in New York City, where Selena Gomez was also in attendance.

This ensemble marks the third Gucci Fall 2017 look he’s worn in practically as many days, with equally loud choices at the GQ Men of the Year Awards and Harpers BAZAAR Celebrates ‘ICONS By Carine Roitfeld.’

Maybe I’m building up a tolerance to his wacky plaids and graphic prints, but this third retro-facing look struck me as a bit less comical than his prior two overloaded style antics.

Regardless, if you’re going to flaunt such a bold statement, at least make sure the pants are properly tailored. The silliest part of this look was the pants dragging the ground.

Jared Leto in Gucci and Selena Gomez in Rodarte

Jared Leto in Gucci and Selena Gomez in Rodarte