Still in Berlin, Germany, Charlize Theron continued the promo circuit for ‘Atomic Blonde’ that culminated in the world premiere on Monday (July 17).

Soho House: After her red-hot look the day before, she chilled out a bit for the film’s promotion at Soho House on Sunday (July 16). I loved the relaxed ease of this Isabel Marant Fall 2017 striped top paired with an Étoile Isabel Marant mini skirt that still provided plenty of leggy, sultry appeal. The flashes of red in her lip and nails also added to the simmering, subtle intrigue of the look with Sara Weinstock and Dana Rebecca Designs jewels topping it off.

World Premiere: If Sofia Boutella was channeling ‘Breakfast at Tiffany’s’ for the premiere, then Charlize was boudoir Barbie. Legs-for-days has been her M.O. thus far, and with this Christian Dior bralette and leather skirt she achieved that and then some, but somehow still managed to make even this unorthodox premiere look seem borderline sophisticated with her grace of form. An even brighter coral-red lip further commanded attention. 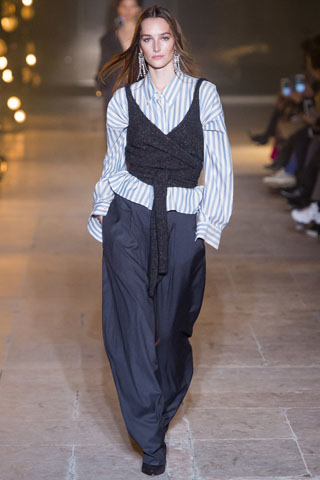