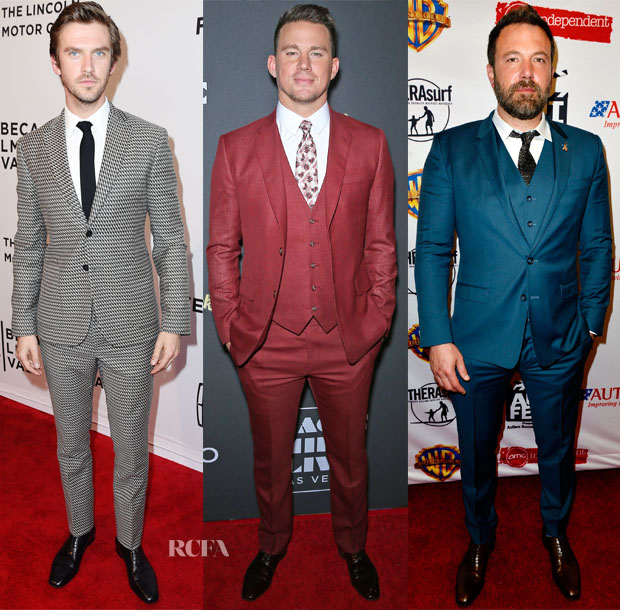 A few men showed their style colours recently on the red carpet. Here, a look at what they wore.

Dan Stevens: Dan was as dapper as could be in a sharp Bottega Veneta patterned suit with Christian Louboutin ‘Greggo’ shoes at the ‘Permission’ premiere at the 2017 Tribeca Film Festival in NYC on Saturday (April 22), where he joined Rebecca Hall. I love the mod movement that the graphic patterning of his suit provided.

Channing Tatum: With Jenna Dewan-Tatum close by, Channing also provided his own brand of eye candy in his version of a red-hot three-piece suit at the grand opening of ‘Magic Mike Live Las Vegas’ on Friday (April 21). The colour is one thing, but I think I would have found more affection for the look had the strangely dated, confetti tie been replaced.

Ben Affleck: The actor attended the first annual AutFest International Film Festival on Sunday (April 23) in Orange, California. While the rich teal-blue hue had potential, this Dolce & Gabbana three-piece suit seemed a bit forced. I blame the high silhouette of the vest and the tie that fell askance. Christian Louboutin ‘Greggo’ shoes rounded out the look.

2013 ESPY Awards Menswear Round Up

2013 BAFTA Awards Menswear Round Up