I have received several messages asking me why I haven’t posted Lea Seydoux’s red carpet look from the Copenhagen premiere.

The simple answer is: because the photos haven’t appeared on Getty, which is the picture agency I licence (and purchase) images from.

I would’ve preferred to have waited for a better image to appear on one of the agencies I use, but in order to move things forward here is a snap taken by Lea’s sister and stylist Camille Seydoux, prior to the actress stepping on the red carpet.

The actress wore a sleek tuxedo gown designed by Alexis Mabille, which hails from the French designers Spring 2013 Couture collection, but I’m assuming the designer made this one especially for Lea’s big promo tour.

I love this ultra feminine take on androgynous tailoring with the satin lapels amping up the glamorous element, to which she added red pumps for an extra touch of spice.

You may remember that Dita von Teese (a huge fan of Alexis Mabille’s designs) wore the black runway version back in 2013. 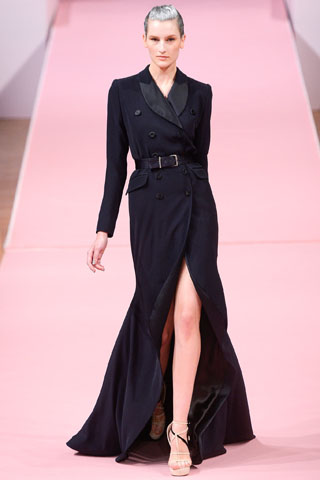