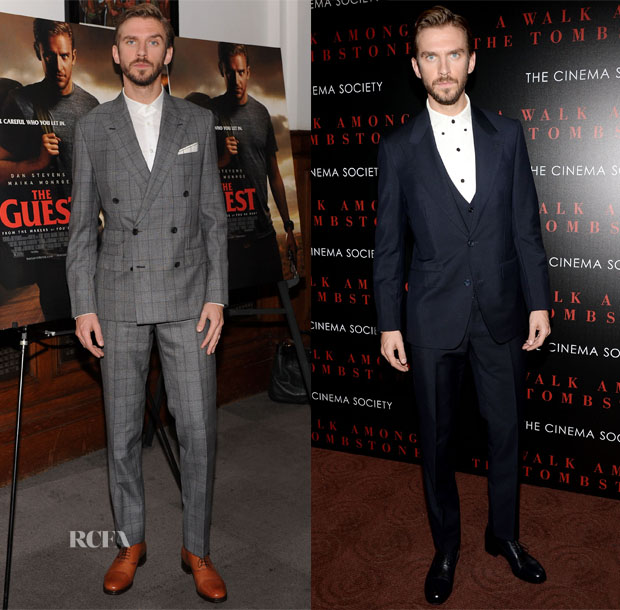 If you thought Dan Stevens was going to disappear into obscurity following his departure from ‘Downton Abbey’, you couldn’t have been more wrong as the actor is so in demand he is currently promoting two of his latest projects.

‘The Guest’ New York Premiere: On Tuesday (September 16) he wore a Thom Sweeney grey windowpane-check double-breasted suit. What I love about double-breasted suits is that they are made for men, not boys. From its chest-accentuating, waist-slimming silhouette to its association with Wall Street power brokers and gangsters, double-breasted tailoring is uncompromisingly masculine. Opting to go sans tie, with tan Christian Louboutin ‘Trepeter’ flats and a white checked pocket square rounding out his look, he solidifies his best-dressed status.

‘A Walk Among The Tombstones’ New York Premiere: Back on the red carpet for the second night in a row last night (September 17), the actor opted for a moody shade of midnight-blue, donning a three-piece Thom Sweeney suit, once again opting to go sans tie. Perhaps the look would’ve felt like something was missing had it not been for the contrasting button detailing on the shirt.

Both looks are impeccably tailored, fit to perfection and showcase that he’s capable of working several styles.

I have to go with the second look; I’m totally entranced by the colour, the sheen and the way it brings out his baby blues.

Which look do you favour?

Best Dressed Of The Week – Emily B...