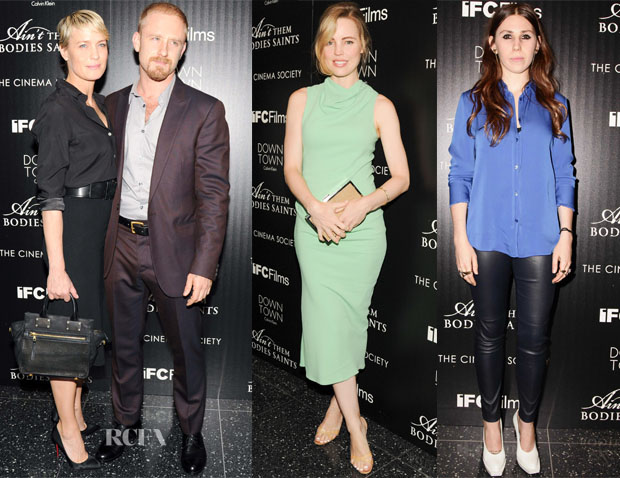 As the hosts of the ‘Ain’t Them Bodies Saints’ screening, along with IFC Films and The Cinema Society, Calvin Klein dressed the other attendees aside from Rooney Mara.

Robin Wright: The actress snuggled up to her beau wearing head-to-toe black.

Ben Foster: Rooney’s co-star grabs my attention in this eggplant peaked-lapel one-button Calvin Klein suit for both the colour and sheen. He styled it with a light-grey shirt.

Melissa George: The blonde beauty looked gorgeous wearing a Calvin Klein seafoam-green cowl-neck loose-fit dress, which she styled with a silver-trimmed Calvin Klein clutch and nude sandals. I love everything about this – mostly the effortlessness of it all.

Zosia Mamet: Also dressed in Calvin Klein, the ‘Girls’ actress took a more laidback approach to the evening, wearing a blue silk shirt with leather pants. I considered giving her a rare pass, despite the racoon eyes, but the white shoes are heinous with this look.

Keri Russell’s Must Have Hot-Pink Lip